You are here: Home / Music / Classic Rock / Song Of The Day by Eric Berman – “Pay Me My Money Down” by Bruce Springsteen & The E Street Band 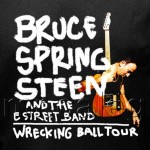