You are here: Home / Music / Classic Rock / Song Of The Day by Eric Berman – “So Like Candy” by Elvis Costello 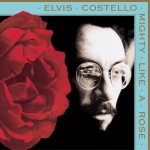