You are here: Home / Music / Doo Wop / Song Of The Day by Eric Berman – “Story Untold” by The Nutmegs 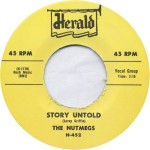 They took their name from Connecticut, “The Nutmeg State,” where they hailed from and cut their teeth on the very same street corners that also produced The Five Satins. Like so many of the Doo Wop groups of the 1950s, The Nutmegs had an ever-changing lineup centered on a lead vocalist, and in their case it was founder Leroy Griffin. After scoring a number two R’n’B hit with this song in 1955, The Crew Cuts rushed out a competing cover version of the song which went up to number 16 and stymied the progress of the original on the charts. The group then got a shot a performing at The Apollo Theater in Harlem where controversy struck when they were accused of doing a suggestive dance on stage and were forced to apologize to DJ Allan Freed before they would gain any more bookings. While this was their biggest hit and soon after the hits began to dry up, in the 1960s a New York City record label called Times Square began releasing a capella Nutmegs demos recorded in the 1950s creating renewed interest in a capella recordings and scoring several more regional hits while igniting a new subgenre of Doo Wop music. This track is another from Rhino’s essential “Doo Wop Box” sets. You can’t help but hear the profound influence this music had on the likes of Frank Zappa, Lou Reed and Paul Simon to name but a few.