You are here: Home / Music / Classic Rock / Song Of The Day by Eric Berman – “This Is The Girl” by Patti Smith 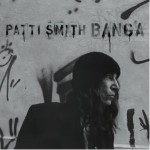 You would be hard pressed to put into words the seismic influence Patti Smith’s first album, “Horses,” had on me when I first heard it in 1975 at the age of 14. It was like a door opened into uncharted territory and I eagerly walked through it. As it turns out, she had a hard time making subsequent records that even approached the magnificence of her debut. Sure, records like “Easter,” “Radio Ethiopia” and “Wave” had their moments, but none of them were consistently good from beginning to end. Then she laid low for nine years and emerged with “Dream Of Life” with its anthem “People Have The Power” in 1988, which in my opinion was a huge disappointment. The records that followed…”Gone Again,” “Peace And Noise,” “Gung Ho” and “Trampin’” all had their moments, but the hold Patti Smith once had over me was forever lost. What was once mystical and poetic, now made my eyes roll up into my head. I refer to this as the Jim Morrison syndrome. So here we have the new album, “Banga,” which is her most consistent record since her late ‘70s heyday. Some of the questionable poetry still remains, but it doesn’t overpower the proceedings and many of the songs have strong melodies that couch the lyrics. I love the feel of this song…it’s got some old school doo wop and soul in its blood brought out by the camaraderie of her longtime band mates Lenny Kaye and Jay Dee Daugherty from the old Patti Smith Group. They’re augmented by bass and keyboards player Tony Shanahan, who also co-wrote this song.