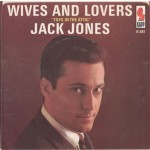 I know I’ve featured this 1963 classic before, but it’s one of my very favorite Burt Bacharach-Hal David compositions. I just love the nonchalance of Hal David’s lyrics – “Hey! Little Girl Comb your hair, fix your makeup. Soon he will open the door. / Don’t think because there’s a ring on your finger. You needn’t try anymore.” It is so chauvinistic in a “ring-a-ding-ding” early sixties kind of Mad Men way, yet innocent and naive at the same time.

Add to it the 1950s bobby sox/teen idol production sheen of the recording and Bacharach’s light-as-air musical accompaniment and you’ve got all of the makings of a classic pop record right up there with the likes of Johnny Mathis’ “Chances Are,” Bobby Vinton’s “Blue Velvet” and Steve Lawrence’s “Go Away Little Girl.”

While it is widely assumed that “Wives And Lovers” was written as the title song to the 1963 film of the same name, it never actually appeared in the film. Hal David: “We were asked to write what would be called an “exploitation song.” It wasn’t going in the film, but it was meant to come out and every time it got played the name of the film would be performed. It was a song made to promote the film, but it was never in the film. It was never meant to be in the film. Exploitation songs were very common in those days.”

Jack Jones won his second Grammy award for “Wives” in the category of Best Pop Male Performance with this song in 1964. He also won one in 1962 in the same category for his hit “Lollipops and Roses.” Along with the equally talented pop vocalist, Robert Goulet, he was also known for his recording of “The Impossible Dream” from the musical Man Of LaMancha. Jones also scored chart hits with “The Love Boat” from the TV show of the same name and “Lady.”

The flip of today’s Jukebox Classic was written by George Duning as the title song from the 1963 film Toys In The Attic, starring Dean Martin and Geraldine Page. (Not to be confused with the Aerosmith song of the same name.) As of two years ago, Jones was still performing and releasing new music.