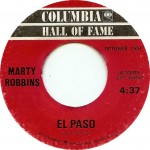 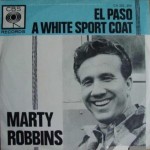 It wasn’t too long ago that I posted a brief piece on Marty Robbins’ recording of “El Paso” in conjunction with the last episode of Breaking Bad. It was great to see the song gain all kinds of new popularity on the heels of its use in the show. Today’s double A-sided Jukebox classic duplicates some of what I posted before, plus adds information about the equally big song on the flip of this single, “A White Sport Coat (And A Pink Carnation).”

Marty Robbins was a singer/songwriter who had dabbled in Rockabilly, Pop and Country recordings. Back in 1959, America was having a love affair with the Wild West with shows like Gunsmoke and The Riflemen lighting up millions of TV screens. It was against this backdrop that Robbins released the album Gunfighter Ballads And Trail Songs featuring today’s self-penned jukebox classic “El Paso.” It was by far one of the most compelling story songs of its time, buoyed by the great guitar work of Grady Martin with background vocals by The Glaser Brothers.

The record was easily twice as long as any other record to hit the radio airwaves, yet it managed to top both the Pop and Country charts. Later on, it was widely covered by rock groups like X, Meat Puppets and the Grateful Dead, who made it a staple of their concert sets from the early 1970s on.

The flip of today’s double A-sided single is “A White Sport Coat (And A Pink Carnation),” another Marty Robbins smash that reached number one on the country charts, yet only number two on the pop charts in 1958. The song was written by Robbins after seeing a group of high school students all dressed up for their prom dates. The track was produced by Ray Conniff , the purveyor of dozens of easy listening vocal albums from the ‘50s and ‘60s, who was charged with making sure the record would cross over to the pop charts. (Mission accomplished!) In 1973, Jimmy Buffett paid homage to Robbins and this song by titling one of his albums A White Sport Coat (And A Pink Crustacean).

Robbins, a race car enthusiast, went on to place 47 records in the Top Ten of the Country charts and to record several more Gunfighter Ballad albums before his death in 1982 at the age of 57.