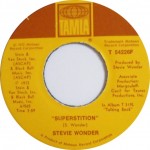 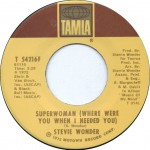 The A-Side of today’s double A-sided jukebox single was the lead single from Stevie Wonder’s landmark album Talking Book. Jeff Beck guested on the album playing guitar on the song “Looking For Another Pure Love.” While in the studio, Beck came up with the drum pattern that kicks “Superstition” into motion. From there, Wonder added the funky clavinet riff that runs through the song and a classic was born. After Wonder wrote the song, he offered it to Beck to record.

In the meantime, Motown chief Berry Gordy heard Wonder’s version and immediately knew it was a surefire smash and pressured Wonder to release it as a single before Beck could commit his version to tape. “Superstition” went on to become Wonder’s second chart-topping hit, his first since “Fingertips” hit the top of the charts in 1963. Jeff Beck was given the song “Because We’ve Ended As Lovers” as a consolation prize which he recorded for his 1975 album Blow By Blow. Beck later recorded Wonder’s “Superstition” with his group Beck, Bogart & Appice.

When Wonder turned 21, he renegotiated his contract with Motown Records giving him total control over his music with increased royalties and publishing. The first fruit of his negotiation was the album Music Of My Mind that included “Superwoman (Where Were You When I Needed You),” the flip side of today’s double-A sided jukebox classic.

The song was one of the first tracks that Wonder worked on with Malcolm Cecil and Robert Margouleff who invented the TONTO (The Original New Timbral Orchestra) synthesizer and recorded under the name Tonto’s Expanding Head Band. Margouleff: “Stevie showed up [at our studio] with the TONTO LP under his arm. He said, ‘I don’t believe this was all done on one instrument. Show me the instrument.’ He was always talking about seeing. So we dragged his hands all over the instrument, and he thought he’d never be able to play it. But we told him we’d get it together for him.” The duo would go on to help shape the recording of Wonder’s Talking Book, Innervisions and Fullfillingness’ First Finale albums.

Wonder is heard playing all of the instruments on the record including the TONTO, except for the electric guitar which was played by Buzz Feiten and the trumpet and saxophone played respectively by Steve Madaio and Trevor Laurence.

The song clocked in at over eight minutes in its original guise on the Music Of My Mind album and was about former Motown secretary and Wonder’s first wife Syreeta Wright. The lyric “trying to boss the bull around” is about Syreeta trying to exert some control on Wonder who is a Taurus.

The first part of the song talks about “Mary’s” desire to leave her current life behind to chase the goal of stardom. The song’s second “Where Were You When I Needed You” part finds the song’s narrator wondering when she will be coming back and why it is taking so long. Musically, the second part of the song was a re-working of Wonder’s 1971 single “Never Dreamed You’d Leave In Summer” from his Where I’m Coming From album. The song was released as a single and climbed to the #33 slot on the pop charts. Indeed, Wonder’s marriage to Syreeta broke up soon after he completed work on Music Of My Mind.”

Both songs on today’s Jukebox classic double A-sided single were originally issued as separate singles, each with a different B-side. The original B-side to “Superstition” was “You’ve Got It Bad Girl” and the original “Superwoman” B-side was “I Love Every Little Thing About You.”

The clip of “Superstition” accompanying this piece is an alternate live in-studio performance of the track with a full backing band.