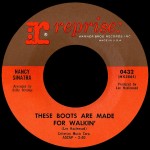 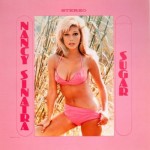 Talent doesn’t always run in the family, but back in the late 1960s a lesser talent was matched with the likes of producer, arranger and all-around Svengali Lee Hazelwood, and solid gold was minted. Case in point is today’s Jukebox classic, “These Boots Are Made For Walking” by Nancy Sinatra.

Let’s face it, Nancy Sinatra would have never received the breaks she got in the music business had it not been for her iconic father, Frank Sinatra and his record label. That’s not to say that Nancy Sinatra is untalented. She possesses a passable voice, and during the 1960s she wasn’t too hard to look at either.

Today’s Song Of The Day was written and produced by Lee Hazlewood who encouraged Sinatra to sing the song as if she were “a sixteen year old girl who fucks truck drivers.” Hazlewood had originally intended to record the song himself, but the song worked much better coming from the perspective of a woman. (Perhaps, not coming from a 16 year old girl, but certainly an empowered woman.) Sinatra: “The image created by ‘Boots’ isn’t the real me.  ‘Boots’ was hard and I’m as soft as they come.” (Quote from Song Facts) That said, the song established Nancy Sinatra as a no-nonsense, take no prisoners kind of artist, and it ultimately went on to sell over six million copies worldwide.

Sinatra was no fly-by-night artist and during her career, she managed to land 10 hits on the Billboard charts including “How Does That Grab You Darlin’,” “Friday’s Child,” the Lee Hazelwood duets “Summer Wine,” “Jackson,” “Oh, Lonesome Me” and “Some Velvet Morning,” “You Only Live Twice,” and her chart topping duet with her famous father “Somethin’ Stupid.”  And even though she was signed to her father’s Reprise record label, she was still in danger of being dropped from her contract.

Lee Hazlewood: “When ‘Boots’ was #1 in half the countries in the world, Nancy came over to my house, and she was crying. She said, ‘They didn’t pick up on my option at Reprise and they said I owed them $12,000.’ I said, ‘You’re kidding, we’ve got the biggest record in the world.’ I rang my lawyer in New York and I rang Nancy the next day and said, ‘How would you like $1 million? I’ve got 3 labels that are offering that for you right now and I can get something pretty good for myself as well.’ She talked to her father and he said she could write her own contract with Reprise – after all she was selling more records than him at the time.” (Quotes from 1000 UK #1 Hits via Song Facts.)

Wrecking Crew stalwarts including Al Casey, Tommy Tedesco and Billy Strange (guitar), Carole Kaye (electric bass), Hal Blaine (drums), Don Randi (keyboards), Chuck Berghofer (string bass) and Ollie Mitchell, Roy Caton and Lew McCreary (horns) were all present and accounted for on the session that gave us this number one hit in February of 1966. A video was also shot for the song to be played on “Scopitone Video Jukeboxes,” and in 1966 and 1967, Sinatra traveled to Vietnam to perform the song for the troops, who adopted it as their unofficial anthem.

So what ever became of the boots that Sinatra wears on the cover of the Boots album? The now-famous boots were made into table lamps that sit on either side of Sinatra’s couch at home.

The flip of today’s double A-sided single, “Sugar Town” climbed to the #5 position on the pop charts in December of 1966, and also reached the top slot on the Easy Listening charts in January of 1967. The song appeared on the follow-up album to Boots called Sugar, and was also performed on Sinatra’s Movin’ With Nancy TV special in 1967.

As light and innocuous as it may seem, “Sugar Town” was actually written about taking LSD, Hazelwood: “I was in a folk club in LA which had two levels. I could see these kids lining up sugar cubes and they had an eye-dropper and were putting something on them. I wasn’t a doper so I didn’t know what it was but I asked them. It was LSD and one of the kids said, ‘You know, it’s kinda Sugar Town.’ Nancy knew what the song was about because I told her, but luckily Reprise didn’t.” (Quote from Song Facts.)