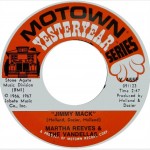 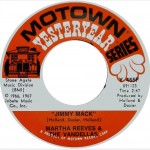 I first discovered today’s jukebox classic not in its original guise by Martha Reeves and the Vandellas’, but from a cover performed by Laura Nyro and LaBelle on their classic 1971 album called Gonna Take A Miracle. When I first heard Nyro’s version, I didn’t make the connection between the song and all of the other great Vandellas hits I already knew from the radio. It wasn’t until my older sister picked up a copy of Martha and the Vandellas’ Greatest Hits album in 1972 that I finally came to fully appreciate the magic of, in my estimation, Motown’s finest girl group.

Martha and the Vandellas was one of the most successful girl groups to come out of Motown. Unlike The Supremes, the Vandellas’ sound was far grittier and more danceable than the sugary pop that catapulted The Supremes to fame. Their list of classic hits includes “(Love Is Like a) Heat Wave,” “Nowhere to Run,” “Come And Get These Memories,” “Quicksand,” “Live Wire,” “Wild One,” “My Baby Loves Me,”  “You’ve Been In Love Too Long,” and their signature single “Dancing in the Street.”

The song was written and produced by the team of Brian Holland, Lamont Dozier and Eddie Holland and it was the group’s last American top-ten hit reaching #10 on the pop charts in 1967, and #1 R&B. It was also from the last batch of Martha and the Vandellas recordings featuring input from Holland-Dozier-Holland before they left the Motown fold. Not coincidentally, their departure from Motown aligned with the waning of The Vandellas’ popularity.

The impetus for the song came out of an industry awards dinner that Lamont Dozier attended. At the awards, Ronnie Mack won a posthumous award for composing the song “He’s So Fine.” His mother came up to accept the award on his behalf and Dozier decided he’d write the song in tribute to Ronnie Mack.

Lamont Dozier: “‘Jimmy Mack’ was about a kid who had written a song that was quite popular. When they called out his name there was something, along with the way his mother picked up the award, that kind of moved me and the name stuck with me. So when a melody came about that name seemed to spring up and fit well with the music we were writing at the time.” (NME 1984 via Songfacts)

Martha and the Vandellas originally recorded the song in 1964 as a typical teen anthem about lost love, but Motown’s quality control team rejected the recording leaving it unreleased in the Motown vaults. Three years later, Berry Gordy became aware of the recording and hearing a surefire hit made sure the song was released as a single. With the passage of time, the record took on a different meaning, especially to the many African American troops who were stationed overseas in Viet Nam.

The song was included in The Vandellas’ ballad-heavy 1967 album Watchout!, however the single version of this song opens with a drum intro that is not featured on the album cut. Personnel on the track included Martha Reeves on lead vocals, Rosalind Ashford and Annette Beard on background vocals, The Andantes: Marlene Barrow, Jackie Hicks and Louvain Demps on additional background vocals and instrumentation by various members of Motown’s session group The Funk Brothers, including Richard “Pistol” Allen on drums, Jack Ashford on vibes, Bob Babbitt on bass, Benny Benjamin on drums, Eddie “Bongo” Brown on percussion, Johnny Griffith on keyboards, Joe Hunter on keyboards, James Jamerson on bass, Uriel Jones on drums, Joe Messina on guitar, Earl Van Dyke on keyboards, Marvin Tarplin on guitar, Robert White on guitar and  Eddie Willis.

The song was also covered by the likes of Karen Carpenter, Phil Collins, Sheena Easton (who scored a #65 chart hit with it in1986) and Bonnie Pointer. It was also cut by The Temptations for their 1967 album In A Mellow Mood.

The flip of today’s double A-sided single climbed up to the #9 position on the pop charts and rose to #2 on the R&B charts in 1966. The song was also written by Holland-Dozier-Holland and is a dead ringer for The Supremes hit “You Can’t Hurry Love” which they also wrote.

The track was also on The Vandellas’ Watchout! album and featured pretty much the same musicians as “Jimmy Mack,” except Betty Kelly sings background vocals instead of Annette Beard. The group also cut a Spanish version of the song under the title “Yo Necesito De Tu Amor.”