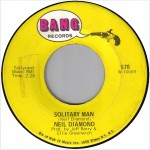 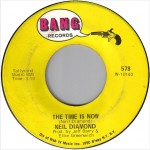 I’ve always been willing and able to give Neil Diamond a pass for syrupy hits like “September Morn,” “You Don’t Bring Me Flowers” and the many other middle of the road cringe-worthy songs that he cut during the 1980s, in exchange for the greatness of hits like “Brother Love’s Traveling Salvation Show,” “Sweet Caroline,” “Holly Holy,” “Cracklin’ Rosie,” “I Am…I Said,” “Song Sung Blue,” “Cherry Cherry,” “Kentucky Woman,” “Thank The Lord For The Night Time,” “I’m A Believer,” “Girl, You’ll Be A Woman Soon,” and today’s jukebox classic, the sublime “Solitary Man.” How could you not?

“Solitary Man” was Neil Diamond’s first single as a recording artist after seeing success as a songwriter of hits for others around the Brill Building.  Diamond was one of the first signees to the Bang record label which was formed in 1965 by Bert Berns, Ahmet Ertegun, Neshui Ertegun and Jerry (Gerald) Wexler. (Their first initials gave the label its name.) Some of Berns’ other early signings on the label were The Strangeloves (“I Want Candy”), The McCoys (“Hang On Sloopy”) and Van Morrison (“Brown Eyed Girl”).

“Solitary Man” was produced by Diamond’s Brill Building cohorts Jeff Barrie and Ellie Greenwich and it was a minor hit when released as a single in 1966 climbing to #50 on the pop singles charts. After signing with UNI Records and having more mainstream success, the song was re-released as a single by Bang in 1970 and it charted again at #21.

Neil Diamond: “Solitary Man was my first song where I tried to really raise the level of my songwriting. It was inspired by the Beatles’ song ‘Michelle,’ which was also written in a minor key. I don’t think I’d ever written a song in a minor key before, it was the first and it kind of broke the dam for me.” (Mojo) It was also an early example of Diamond looking inside to write more personal material about himself. Diamond: “After four years of Freudian analysis I realized I had written ‘Solitary Man’ about myself.” (Pete Paphides from The Times.)

The song was the lead track on Diamond’s debut album for Bang called The Feel Of Neil Diamond. The album included several original compositions including “Cherry Cherry,” “Do It” and “Oh No No (I’ve Got A Feelin’),” plus covers of “Hanky Panky,” “Red Rubber Ball,” “Monday Monday” and “La Bamba.”

The song has been covered by Johnny Cash, Cliff Richard, Chris Isaak, T.G. Sheppard (who scored a #14 Country hit with the song in 1976), Billy Joe Royal, Johnny Rivers, Jay And The Americans, The Sidewinders, B.J. Thomas, the metal band HIM (who took the song into the UK top ten) and many others.

Diamond was one of Bang Records’ early success stories, but he left the label and signed to UNI records because he felt that Berns was holding him back artistically by not releasing his introspective song “Shilo” as a single. After Berns died suddenly in December of 1967, his wife took control of the label and she took to releasing older Diamond song as singles in order to compete with his latest output for UNI. One of the singles she released was “Shilo,” which climbed into the top forty.

The flip of today’s single was one of two B-sides that graced the “Solitary Man” single. The original 1966 issue of the single featured the track “Do It” on the flip; the 1970 rerelease featured the bluesy “The Time Is Now.”

The Neil Diamond we hear on “The Time Is Now” isn’t the syrupy sweet balladeer of “Heartlight” and “You Don’t Bring Me Flowers,” nor is it the fun-loving Brill building party boy of “Cherry Cherry.”  Instead, we get a rough-cut Diamond totally ensconced in the blues.