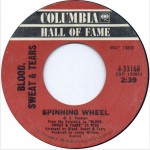 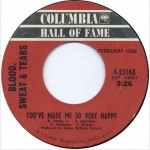 “What goes up…must come down…” not only is this the first line to Blood Sweat & Tears’ signature hit, but it also foreshadowed the group’s red hot ascent to the top, and its equally quick drop out of fashion.

Blood, Sweat & Tears had their genesis in an experiment by ex-Blues Project member and Bob Dylan sideman, Al Kooper. Kooper wanted to create a group that melded jazz horns to rock rhythms for a fresh new sound. Kooper:  “Like Maynard Ferguson’s band from the years 1960-1964, I wanted a horn section that would play more than the short adjectives they were relegated to in R&B bands; but, on the other hand, a horn section that would play less than Count Basie’s or Buddy Rich’s. Somewhere in the middle was a mixture of soul, rock, and jazz that was my little fantasy.” (Backstage Passes and Backstabbing Bastards by Al Kooper).

Kooper formed Blood Sweat & Tears with Jim Fielder, Fred Lipsius, Randy Brecker, Jerry Weiss, Steve Katz and Bobby Colomby. Kooper was fond of the production that James William Guercio provided for The Buckinghams and for the first BS&T album, Child Is Father To The Man, the two paved the way for horn-laden groups like Chicago Transit Authority, The Ides Of March and Chase that would soon rule the charts.

After working on BS&T’s debut album, Kooper left the group moving on to Super Session fame with a whole host of recording artists. With Kooper gone, BS&T members Bobby Colomby and Steve Katz began looking for a new vocalist and had considered Alex Chilton (of The Box Tops and later Big Star), Stephen Stills and Laura Nyro for the job, before going with a throaty Canadian singer named David Clayton-Thomas who was recommended to them by Judy Collins.

Not only did Clayton-Thomas bring a bona-fide personality to the band via his rough and raw vocal prowess, but he also wrote their biggest hit (and today’s jukebox classic) “Spinning Wheel.” Clayton-Thomas:  The song was “written in an age when psychedelic imagery was all over lyrics…it was my way of saying, ‘Don’t get too caught up, because everything comes full circle.” (Hyatt, Wesley (1999). The Billboard Book of #1 Adult Contemporary Hits (Billboard Publications), page 74.)

The song quickly climbed to the #2 position on the charts in 1969 and was nominated for three Grammy Awards, winning one for Best Instrumental Arrangement in 1970. As a goof, the band interpolated an Austrian tune from 1815 called “O Du Lieber Augustin” (or “The More We Get Together”) to end the song.

The song was like catnip to the many middle-of-the-road vocalists of the late sixties and was covered by Shirley Bassey, James Brown, Sammy Davis Jr., Peggy Lee, Chet Baker, Ted Heath and many others.

The flip of today’s jukebox classic is “You’ve Made Me So Very Happy.” The song was originally a Motown hit written by Berry Gordy, Frank Wilson, Brenda Holloway and Patrice Holloway, and recorded by Brenda Holloway who brought the song to the #39 position of the charts in 1967. It was initially Kooper’s idea for the band to record the song, but by the time they committed it to wax, he’d already left their ranks. It was one of three singles that climbed to the #2 position on the pop charts from their Blood Sweat & Tears album. (The other two were “Spinning Wheel” and the Laura Nyro song “And When I Die.”)

The eponymously titled album topped the charts for seven weeks in 1969, sold over four million copies and won the Grammy for Album Of The Year, beating out The Beatles Abbey Road.  It featured the stellar lineup of David Clayton-Thomas on vocals, Lew Soloff on trumpet, Bobby Colomby on drums, Jim Fielder on bass, Dick Halligan on keyboards, Steve Katz on guitar, Fred Lipsius on saxophone, Chuck Winfield on trumpet, Jerry Hyman on trombone, performing  an eclectic mix of songs including a version of Billie Holiday’s “God Bless The Child,” Laura Nyro’s “And When I Die,” Traffic’s “Smiling Phases” and several classical pieces composed by Erik Satie.

The group appeared at Woodstock at the height of their popularity; however their performance wasn’t filmed due to the insistence of their manager who hadn’t negotiated terms for the filming of their set. By the time of the release of the Woodstock film, Blood Sweat & Tears had missed the boat on being accepted by the hip rock cognoscenti and were subsequently seen as a lightweight AM radio singles band.

The band’s quick decline came on the heels of several other equally bad decisions including their participation on a tour of Eastern Europe sponsored by the U.S. Department Of State (during a time when their fan base was highly suspect of all things government), and then playing shows in Vegas. Even though their record sales dramatically slumped, they have continued to persevere and still tour today with American Idol runner-up Bo Bice as their lead singer and Glenn McClelland of Ween on keyboards.