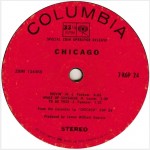 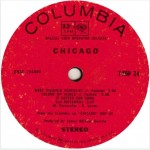 Jukebox EPs (or extended plays, or tiny albums) were made for the coin operated jukebox market during the 1950s through the mid-1970s. They were small-holed 7” records that played at 33 1/3 RPM and cost 25-50 cents per play. They typically included four to six tracks from an album and afforded the listener at a diner or bar an extended taste of a record by their favorite artist.

Today’s jukebox EP is culled from the second album by Chicago Transit Authority who by 1970 shortened their name to just plain Chicago. The album carried the title Chicago as well, but it is far better known as Chicago II. Although the album spawned several big singles including “25 Or 6 To 4,” “Make Me Smile,” and “Colour My World,” only one of them is present on the jukebox EP that was released to promote the album on coin operated machines.

Chicago’s first three records were all double albums, which was unheard of at the time. Their manager and producer, James William Guercio, had just come off of working with Blood Sweat & Tears and he used his clout with Columbia Records to push the notion of double albums through.

This gave the band featuring Robert Lamm on keyboards, Terry Kath on guitar, Peter Cetera on vocals, James Pankow on trombone, Lee Loughnane on trumpet, Walter Parazaider on saxophone and Danny Seraphine on drums, room to stretch their musical muscle especially on their debut album. By the time of their second release, Chicago began to shorten their tunes and play up the horns, leading them to the dominance of the singles charts they’d have for the rest of the 1970s.

The highlight of the second Chicago album was the suite that took up most of side two called “Ballet For A Girl In Buchannon” which included three songs on today’s EP, “Colour My World,” “To Be Free” and “West Virginia Fantasies.”  The Buchannon of the suite’s title was actually a misspelling of Buckhannon, West Virginia.

After the band recorded the suite, they were hesitant to have singles edited from it for release. When the band acquiesced, they ended up releasing two of their most beloved singles, “Make Me Smile” which climbed to the #9 position on the charts in 1970, and “Colour My World” which went two slots higher to #7 in 1971.

“Colour My World” was the slow dance classic of 1970 and has also proven over the years to be one of the band’s best-loved recordings. It was written by trombone player James Pankow and features Terry Kath singing the lead vocals with Walter Parazaider on the flute solo.

James Panko (as told on The Chris Isaac Hour TV show): “It’s a small segment of a multi-movement piece on our second album which is basically a tribute to my first love. I had been listening to Bach – the Brandenburg Concertos, and they had all those arpeggiated melodies. I sat at a piano and started messing around with these arpeggios. That cycle of arpeggios became the foundation of the song. Frank Sinatra called our publicist and said, ‘Ask that kid to write another verse for that song.’ I thought about it, I called him back and said I can’t do it – it’s like sewing another arm on your kid, I can’t do it.”

Other songs on the EP include “West Virginia Fantasies,” an instrumental from the Suite that highlights the group’s compositional acumen; “It Better End Soon 2nd Movement” which was also from the album’s other extended suite that took on the Nixon administration, “Movin’ In” the opening track to Chicago II, “To Be Free” (another instrumental) and the single “Make Me Smile.” The album climbed to the #4 position on the U.S. charts upon its release in 1970.

The band continued to rule the charts throughout the 1970s becoming one of the decade’s biggest hit makers until Terry Kath died of an accidental self-inflicted gunshot wound in 1978 while participating in a game of Russian roulette. The band would never be the same again without him.