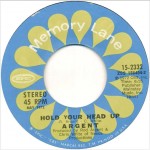 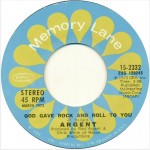 When the British Invasion band The Zombies disintegrated in 1969 before the posthumous release of their biggest hit single “Time Of The Season,” keyboardist Rod Argent formed the band Argent with Jim Rodford on bass, Bob Henrit on drums and Russ Ballard on guitar. (The latter two musicians were members of the group Unit 4+2, the subject of The Jukebox Series #33.)

While The Zombies’ music consisted of finely tuned ear worms that were designed to climb up the charts and go directly into the hearts of music fans around the world, Argent’s music was a far more difficult mix of jazz, prog rock and classical influences. While the group’s first two albums didn’t make any significant waves on the single or album charts, the song “Liar” from their debut became a top ten hit by Three Dog Night.

Today’s jukebox classic is the song Argent is best known for. “Hold Your Head Up” was written by Rod Argent and Chris White (who also wrote songs for The Zombies) and was released on their third album All Together Now which was released in 1972. The heavily edited single version of the song (from 6:15 on the album down to 3:15 for the single) sold over a million copies and climbed to the #5 spot of the U.S. and UK pop charts. (For our purposes, I’ve included an audio clip of the far superior unedited version of the song.)

With its propulsive beat, layered vocal harmonies and long sinuous organ solo, the song grabbed hold of the AM charts in 1972, and fit in perfectly alongside tracks by Yes, Genesis and Jethro Tull on the FM radio playlists of the early 1970s. Over the years, the song has been covered by the likes of Steppenwolf, Uriah Heap and the 1980s hard rock band Mr. Big.

The flip of today’s single is “God Gave Rock And Roll To You” which is probably best known by the covers it spawned by KISS and the Christian rock band Petra. The song was actually recorded during sessions for Argent’s All Together Now album but was not released as a single until it appeared on their 1973 album In Deep.

The KISS cover of the song (titled “God Gave Rock ‘n’ Roll To You II”) was featured in the 1991 film Bill & Ted’s Bogus Journey and its soundtrack album, and later appeared on KISS’ Revenge album.  Petra converted the song into a well-known Christian rock anthem and recorded it twice, once on their 1977 album Come And Join Us, and again on 1984’s Beat The System.

After running its course with little follow up success, Argent broke up in 1976 and Jim Rodford joined The Kinks while Rod Argent began producing albums. The original lineup reformed in 2010 for the High Voltage Festival in London, and these days Rod Argent and Colin Blunstone (of The Zombies) tour under their own names and as The Zombies performing Argent and Zombies hits.