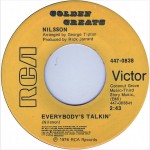 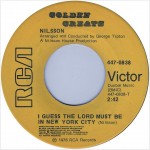 Harry Nilsson was a puzzlement. He was a brilliant songwriter who wrote some of the greatest pops songs of the 1960s. Songs like “One” (Three Dog Night), “Cuddly Toy” (The Monkees) and “Without Her” (Glen Campbell) came pouring from his pen providing many artists with some of their biggest hits. Yet the hits he scored on the charts were primarily written by others. Go figure…

Today’s jukebox classic is one of Nilsson’s biggest hits; some would say it is his signature song. And it is one that Nilsson (the songwriter) did not write. “Everybody’s Talkin’” was written and originally recorded by singer/songwriter Fred Neil. Neil was a big deal of the Greenwich Village folk music scene in New York City of the early 1960s.

Neil’s version was the last song written and recorded for his essential eponymously titled album which was released by Capitol Records in 1967. Neil was itching to get back to Florida and the ocean but needed one more song for his debut album. The song was hastily written as an afterthought at the urging of his producer, and recorded in one take. The album also included Neil’s song “The Dolphins” (covered most famously by Jefferson Airplane) and several years after recording the song, Neil fulfilled the promise of the lyrics to both songs and gave up the music business entirely in favor of living near the ocean in Florida and working with dolphins until the end of his life in 2001.

Nilsson recorded the song at the behest of his producer Rick Jarrard for his second album Aerial Ballet in 1968. The Beatles’ press officer Derek Taylor was a big fan of Nilsson’s 1967 debut album Pandemonium Shadow Show, and famously ordered a case load of the album and gave them out to all of his friends including The Beatles who also became huge fans and good friends with Nilsson.

Taylor suggested Nilsson to film director John Schlesinger who was actively looking for a theme song to his current movie Midnight Cowboy. Schlesinger had been using Nilsson’s recording of “Everybody’s Talkin’” as a place holder in the film until the right song came along. Nilsson suggested that he use “I Guess The Lord Must Be In New York City,” a song he wrote from his 1969 Harry album for use in the film. Schlesinger had grown so used to hearing the song matched with the corresponding scene that he decided to keep “Everybody’s Talkin’” in the film. At the same time, Bob Dylan also pitched a newly-penned song that he specifically composed for the film called “Lay Lady Lay,” however his submission came too late for its inclusion. Ultimately, Dylan’s recording of “Lay Lady Lay” became one of his biggest hits climbing all the way to #7 on the singles charts in 1969.

After its appearance in the movie, Nilsson’s version climbed to the #6 position of the singles charts in 1969 and sold over a million copies. It also won Nilsson a Grammy Award for Best Contemporary Vocal Performance, Male in 1970. After the song became a hit for Nilsson, Capitol Records rereleased Fred Neil’s self-titled 1967 album under the name Everybody’s Talkin’ and released his version as a single.