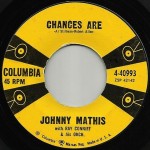 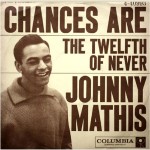 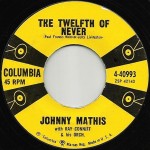 Fluff piece…or Pure Pop For Then People? Neither of the above…just another great jukebox classic.

Smooth and intimate. Those are adjectives you don’t hear that often to describe much of the music being made today. But there was a time when smooth and intimate was the basis for an entire genre of music. I’m talking about Pop Music…The Pop music of the pre-rock era…Pop music your mom and pop listened to. Real pop music…Mitch Miller Pop…Ray Conniff Pop…Pop music that came from unforgettable singers like Doris Day, Bobby Vinton, Rosemary Clooney, Tony Bennett and, of course Johnny Mathis.

Sure, there were many more accomplished vocalists back then too, vocalists like Ella Fitzgerald, Nat Cole, Frank Sinatra, Mel Tormé and Carmen McRae, who worked with some of the finest jazz players and arrangers of the day. But, with the exception of Sinatra and Cole, they really didn’t rule the airwaves.

So, if Michael Jackson was the King of Pop of the ’80s and beyond, then Johnny Mathis was his predecessor, the king of late 1950s and early 1960s pop. (I guess that leaves Barry Manilow for the 1970s.)

“Chances Are” was written by the songwriting team of Robert Allen and Al Stillman. They were the same team that also wrote Mathis’ “It’s Not For Me To Say,” The Four Lads’ “Moments To Remember,” “No Not Much,” “Enchanted Island,” and the holiday classic “Home For The Holidays.”

It’s all pillow talk from Mathis. The first thing that gets you is the fabulous echo-laden sound that puts the listener smack dab in the middle of cloud nine, provided courtesy of producer Mitch Miller. Then there’s the piano, gently caressing and embellishing the melody. But it all wouldn’t mean a hill of beans if it wasn’t for the gossamer-smooth Mathis magic on the vocals. “Chances Are” is one of the iconic records of the late 1950s. It’s a heavenly slice of pop production and much more than just a great song, it’s a great record. It’s the culmination of songwriting craft, performance and production that creates the whole sonic picture, and makes this record one for the ages.

When released as a single back in 1957, “Chances Are” soared all the way to the number four spot on the charts, while its flip side, “The Twelfth Of Never” also became a big hit.

“The Twelfth Of Never” was written by Jerry Livingston and Paul Francis Webster and when it was released as the flip of “Chances Are” in 1957, it rose to the #9 position of the pop charts. The song’s melody (minus the bridge) was based on the old English folk song called “The Riddle Song” which is also known as “I Gave My Love A Cherry.”

The song was also brought to the charts by Cliff Richard who scored a #8 UK hit with it in 1964 and Donny Osmond who rode the song to the #8 position in the US, while topping the UK charts with the song in 1973. Others who have had their way with the song include Nina Simone, Cher, Andy Williams, Glen Campbell, Johnny Nash, Roger Miller, The Chi-Lites, Tammy Wynette, Roger Whittaker, Olivia Newton-John, Dolly Parton, Barry Manilow and Jeff Buckley.