You are here: Home / Archives for Harry Nilsson 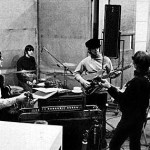 Rock History for June 1 1966, The Beatles returned Abbey Road studios to complete recording on "Yellow Submarine. " The band, plus friends and members of the staff helped search for a "weird instrument" to create the desired sound effects.  John Lennon ended up blowing bubbles in a bucket of water.  Paul and John imitated different voices.  Roadie Mal Evans played on a bass … END_OF_DOCUMENT_TOKEN_TO_BE_REPLACED

1965, Working at Abbey Road studios in London, The Beatles recorded the rhythm track "You're Going To Lose That Girl" in two takes. On his new song, John Lennon sang, and accompanied himself on acoustic guitar, backed by Paul and George.  The band lip-synched to the recording for the movie Help!  The final album mix was made four days later. 1965, The Who learn by letter … END_OF_DOCUMENT_TOKEN_TO_BE_REPLACED

Song Of The Day by Eric Berman – The Jukebox Series #49– Nilsson: “Everybody’s Talkin’” b/w “I Guess The Lord Must Be In New York City” – RCA Gold Standard 45 447-0838 (S5/T5) “The Jukebox Series” focuses on the 80 records that inhabit my 1963 Seeburg LPC1 jukebox. I’ve had my jukebox (or as I like to call it “the prehistoric iPod”) for a little over twelve years and in that … END_OF_DOCUMENT_TOKEN_TO_BE_REPLACED

Nilsson is one of my favorites songwriters, right up there with Lennon & McCartney, Bob Dylan, Bacharach & David, Jagger & Richards, Stevie Wonder, Elvis Costello, et. al. This song was originally from Nilsson's second album, "Ariel Ballet" from 1968. But a funny thing happened on the way to the pressing plants. Without Nilsson’s knowledge, RCA pulled the song off … END_OF_DOCUMENT_TOKEN_TO_BE_REPLACED

You may not recognize him by his name, but just one listen to the song and you'll instantly recognize the singer as the lead voice of The B-52's. The song, of course, was written and originally recorded by Harry Nilsson back in 1971 on his "Nilsson Schmilsson" album and quickly became a hit. It is now considered, with good reason, to be a rock classic. This version comes from … END_OF_DOCUMENT_TOKEN_TO_BE_REPLACED