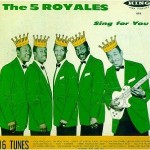 If ever a group deserved to be in the Rock ‘n’ Roll Hall Of Fame, it should be The 5 Royales. Not only were they a pioneering R’n’B and Doo Wop vocal group, but they had one of the greatest songwriters of the era in Lowman “Pete” Pauling as a member. Pauling wrote most of the Royales’ material and many of their songs went on to be big hits for others. The 5 Royales were formed in North Carolina in the early 1950s and consisted of Lowman “Pete” Pauling, Jimmy Moore, Obadiah Carter, Otto Jeffries and Johnny Tanner. They recorded for King Records and had chart success with songs like “Monkey Hips And Rice,” “Baby Don’t Do It” and “Somebody Help Me.” But it was the songs that were penned by Pauling and recorded by others that really made them legends. The group was responsible for introducing this song that later went on to be a big soul hit for James Brown. They also recorded the original versions of “Dedicated To The One I Love” made famous by both The Shirelles and The Mamas & The Papas, and “Tell The Truth” which was originally recorded by Ray Charles.