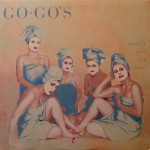 When they burst onto the scene in 1980, a New Wave girl group was indeed a novelty. While their sound harked back to the first wave of girl groups from the 1960s, these ladies could also write their own material and play their instruments. The Go-Go’s rose from the same fertile LA punk scene as the group X, whom they shared rehearsal space with. Lead singer, Belinda Carlisle, had briefly been a member of The Germs before joining forces with Jane Wiedlin (guitar), Charlotte Caffey (guitar, keyboards), Gina Schock (drums) and Kathy Valentine (bass) to form what would become one of the most successful New Wave groups of the era. I caught the band in concert as an opening act for The Specials at the Pier in New York City in 1980, before the release of their fine debut album “Beauty And The Beat.” Right from the onset the group had charisma to burn and enough first-rate material to propel them straight to the top. Superstardom ensued with this hit and “Our Lips Are Sealed,” as did the legendary drug-fueled debauchery that took place on the road. Their second album “Vacation” was well received and spawned a few hits, but did not have the chart dominance of the debut. By the time of their third album, 1984’s “Talk Show” and its hit “Head Over Heels,” the group began to disintegrate in a fog of drug addiction and acrimony. Once the group broke up, Belinda Carlisle had the most success scoring several hits including the chart-topping “Heaven Is A Place On Earth.” Jane Wiedlin also scored a hit with “Rush Hour,” and appeared in several films while the rest of the band members released records that were largely met with indifference. The band would regroup several times over the years for lucrative reunion tours.