You are here: Home / Music / Classic Rock / Song Of The Day by Eric Berman – “Where Was You At” by WAR 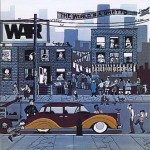 When they first began recording, it was Eric Burdon and WAR and War were billed as the backing band for Eric Burdon of the The Animals. The group was the brainchild of Burdon and Jerry Goldstein who was a member of The Strangeloves and co-writer of such classic singles as “I Want Candy,” “My Boyfriend’s Back” “Come On Down To My Boat,” “Sorrow” and “Hang On Sloopy.” Goldstein was Sly & The Family Stone’s manager when he saw WAR performing in a bar and signed them to his own Far Out Production company. With Burdon at the helm, WAR scored the smash hit “Spill The Wine” from their 1970 debut album “Eric Burdon Declares War.” Another combo album followed, before Burdon went on his merry way leaving WAR to establish themselves as an entity in their own rite. With Goldstein staying with the band, it wasn’t long before WAR began scoring hits on their own like “All Day Music” and “Slippin’ Into Darkness” from their 1971 debut album. WAR’s unique sound was steeped in Latin Jazz, psychedelic Rock and Funk, layering Lee Oskar’s harmonica lines over Charles Miller’s saxophone in unison on extended jams. The year 1972, saw the release of their breakthrough album, “The World Is A Ghetto,” with its title track hit and AM radio classic “The Cisco Kid.” Today’s Song Of The Day features the group’s classic lineup of Lee Oskar on harmonica, Lonnie Jordan on vocals, organ and percussion, B.B. Dickerson on bass, Papa Dee Allen on percussion, Howard Scott on guitar, Harold Brown on drums and Charles Miller on saxophone on one of the deep cuts from the “Ghetto” LP. WAR continued to score hits throughout the 1970s including “Low Rider,” “Why Can’t We Be Friends,” “Summer,” “Gypsy Man” and many others. Charles Miller was murdered in 1980 and Papa Dee Allen succumbed to a heart attack while performing on stage in 1988. The rest of the band has continued throughout the years recording under the names The Music Band and The Lowrider Band, while Burdon got back together with Lonnie Jordan for a one-off reunion, billed as Eric Burdon and WAR, at The Royal Albert Hall in 2008.