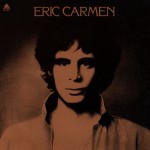 Eric Carmen was one of the prime purveyors of 1970s power pop with his group Raspberries and their hits “Go All The Way,” “I Wanna Be With You,” “Let’s Pretend” and “Overnight Sensation (Hit Record).” With the breakup of Raspberries in 1975, producer Jimmy Ienner brought Carmen to the fledgling Arista record label where, under the aegis of Clive Davis, he took on a more baroque ballad style.

Carmen hit the ball right out of the park with the first single from his self-titled debut album, “All By Myself,” which went all the way to the number two position on the charts. The song was inspired by Rachmaninoff’s “Piano Concerto No. 2” and featured a George Harrison-esque guitar solo. It was later covered by Celine Dion who brought the song back into the top five of the charts in the 1980s.

The album’s follow up single was “Never Gonna Fall In Love Again,” which was inspired by a different part of the same Rachmaninoff piece and charted at #11. Carmen seemed to be channeling Elton John and The Beach Boys throughout the album, especially on the tracks “Sunrise,” “My Girl” and the rocker “No Hard Feelings.”  The album culminated with a credible cover of “On Broadway.”

Today’s Song Of The Day is one of a few rockers on the album and is far more in line with the music Carmen made with Raspberries. With its lush Beach Boy harmonies and infectious melody, it’s hard to imagine why Carmen’s recording wasn’t a huge hit back in 1975. That said, the song did go on to become a #3 single for Shaun Cassidy who would also take the song, “Hey Deanie,” (from Carmen’s follow up album Boats Against The Current) into the top ten.

After Carmen’s second Arista album, the hits began to dry up. However, he continued to have hits via covers of his songs by Olivia Newton John, Samantha Sang and Mike Reno and Ann Wilson, whose “Almost Paradise” from the movie Footloose was a huge hit in 1984.  Carmen returned to the top ten again in 1987 with his singles “Hungry Eyes” and “Make Me Lose Control,” from the movie Dirty Dancing.