You are here: Home / Music / Big Band / Song Of The Day – “Chicken Fat” by Robert Preston 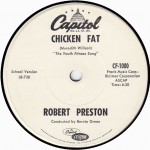 It’s “Poultry in motion!” (Sadly, I didn’t write this line but it was too great to pass up.)

How many of you remember this gem from the early 1960s? Even though I was only one year old when this record was released to public schools across the nation, I distinctly remember exercising to this song in gym class when I was in grade school. “Go you Chicken Fat, Go Away!”

Childhood obesity is nothing new. Even though the problem has risen to epidemic proportions, it was an issue in America as early as the late 1950s.

Enter Chicken Fat to save the day!

In the late 1950s, an international study found that American children were far less fit than children from other countries. In response, President Dwight D. Eisenhower created the President’s Council on Youth Fitness. During the 1960 Presidential election, John F. Kennedy made physical fitness an integral part of his campaign. While on the campaign trail, he wrote an article for Sports Illustrated called The Soft American which spelled out his proposed fitness program.

When Kennedy got into office, Physical Fitness for America’s youth was a very high priority: “We’re in a war with two great nations. Not a shooting war, but we’re at war with China and Russia. If we cannot do something to improve the physical fitness of Americans, then, as history has proven, in fifty years we will not be able to compete with these societies.” (John F. Kennedy) And as we know today, Kennedy was absolutely prescient on this topic. To that end, Kennedy chose Bud Wilson, the football coach from the University of Oklahoma to be the first Physical Fitness Consultant to the President.

Around this time, Meredith Wilson’s musical The Music Man was a smash Broadway hit starring Robert Preston as Professor Henry Hill. The musical included such Meredith-penned standards as “76 Trombones,” “Goodnight My Someone” and “Till There Was You.”

Upon hearing about Kennedy’s program, Meredith Wilson offered to write an exercise song completely free of charge to help, and Robert Preston agreed to sing it. Wilson consulted with Physical Fitness Council director Ted Forbes, to ensure that the song would provide a good workout and came up with today’s Song Of The Day, Chicken Fat.

Since Capitol Records was riding high on the charts with the Original Cast Recording of The Music Man, they agreed to provide their musicians, chorus and recording studios to record the song. Crucially, they also provided their distribution network, shipping over three million copies of the record to public schools across the country, completely free of charge.

There were two versions of the song recorded for the 7-inch, 33 1/3 RPM small-holed single. One version ran over six and a half minutes and featured eleven different exercises, including push-ups, sit-ups, jumping jacks, toe touches and marching in place. The flip side was a two-minute “Disk Jockey” version, that was edited for radio and television use.

After being out of print for close to 40 years, an updated version was released in 2000 by Bernie Knee who was a part-time cantor and commercial jingle singer. That recording is still a popular favorite in schools today.