You are here: Home / Music / Alternative / Song Of The Day – “Collide-A-Scope” by Todd Rundgren 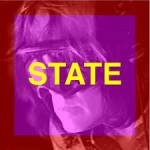 I love Todd Rundgren. I’ve been a fan since the early 1970s, and at this point I don’t see that ever changing. Like Neil Young, Todd is one of the most mercurial of artists who still makes interesting records in all sorts of genres mainly to please himself. That’s made for lots of experimentation along the way resulting in all different types of records like Beatles sound-alikes, samba reworking of older material, a record of Robert Johnson covers (called Todd Rundgren’ s Johnson, no less), rap and disco. So even when Rundgren doesn’t hit the ball out of the park, say on records like (re)Production and One Long Year, you can always count on at least being taken on an interesting ride.

Things must get awful claustrophobic all alone in that studio for Todd Rundgren, judging by the state of affairs on his new album State. It’s an album full of doctor visits, heart attacks, death, bummer relationships, a little bit of faith and a dash of party liquor to make things better.

Todd’s 24th studio effort features him alone in the studio playing everything on ten tracks in different states of heaviosity. The album’s opener “Imagination” begins with classic swirling synths circa 1974 Utopia, before morphing into Black Sabbath territory. The eight minute track features Rundgren’s statement of purpose, “I am what I am…I don’t have a plan to sell myself…Every day’s the same old song…” Unfortunately he fulfills this purpose on a record that pays more attention to creating electronic soundscapes than on writing actual songs.

The first thing you notice is the expansive, thunderous electronic sound inherent in all of the tracks. The audio tracks are powerful and sound good when played loud, but they are almost completely devoid of any melody whatsoever. By the end of the ten tracks, you’ve been exhausted from being pounded into submission. If you’re a fan of the Philly soul Todd, the pop tunesmith Todd or the prog rock Todd, this isn’t going to be the album for you.

The overall sound of the record uses dubstep and EDM as a jumping off point, but by trying to keep up with these trends, Rundgren comes off sounding even more out of step, especially with the wood and strings revival taking place by the current crop of groups that are ruling the charts. And besides, Rundgren did electronica much better before there ever was dubstep.

The new album has more in common with Liars and The Individualist than any of his other records; however both records have songs with far more memorable melodies than this one. Today’s song of the day employs the same lyrical format as on “Happy Anniversary” from Liars, although it really doesn’t have anything much to say. Elsewhere, the song “Serious” comes off like a techno version of Jimi Hendrix’s “Crosstown Traffic,” and “Smoke” attempts to get things going on the dance floor, but ultimately falls flat.

State is also one of Todd’s most lyrically inane records, with songs whose sentiments travel from the misguided to the just plain senseless, especially on “Party Liquor,” one of the record’s weakest tracks. The rest of the songs try to make heavy comments on different states of the world, like “Angry Birds” and “Ping Me” which take on our phone-centric tech savvy lifestyles, although they really don’t say much at all.

Songs like “Something From Nothing,” “Sir Reality” and “In My Mouth” come closest to the Todd most people love the most in both feel and vocal style (and as a result are the best of the bunch), but they only provide a diversion from the claustrophobic electronics elsewhere.

To make matters worse, the deluxe version of the CD includes a second disc with a live performance from last November featuring the Metropole Orchestra backing Todd on such classics as “Another Life,” “Hello It’s Me,” “We Gotta Get You A Woman,” a gorgeous “Flamingo” from A Wizard A True Star, “Mammon,” “Fascist Christ,” several songs from Hermit Of Mink Hollow: “Can We Still Be Friends,” “Bag Lady” and “Fade Away,” several songs from 2nd Wind: “It I Have To Be Alone,” “Love In Disguise” and  “Love Science,” plus many others. Unfortunately, listening to this disc only puts how weak some of Rundgren’s new songs are into hard contrast.

So, Todd really has nothing to prove with State, as stated in the album’s very first song, and overall he does a good job at doing just that.