You are here: Home / Music / Alternative / Song Of The Day – “Careers In Combat” by Parquet Courts 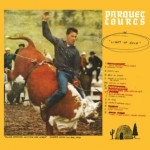 I love the Pitchfork Music Festival. It’s my one opportunity per year to feel a little ahead of the curve when it comes to discovering new music. Attending the festival gives me bragging rights about getting the chance to see bands before they make it big.

Pitchfork is also the most user friendly of all the music festivals. Its 30,000 capacity per day is much smaller than Lollapalooza, which maxes out at 100,000 each day. There are only two stages with music going at any given time, and since you don’t have to walk miles to get between them, you can easily sample six to ten bands each day.

My modus operandi toward Pitchfork is to listen to the many bands on the bill that I’ve never heard of on Spotify well in advance, so by the time the festival rolls around, I’ll have a pretty good idea of who I want to see. With the lineup announced and the festival several months away, I’ve already found one must see band.

Parquet Courts formed in Brooklyn in 2010, around Andrew Savage (guitar, vocals) and Austin Brown (guitar) who were members of the band Fergus And Geronimo. After recording several F&G records, they relocated from Texas to Brooklyn and recruited Sean Yeaton on bass and Max Savage (Andrew’s brother) on drums. Their first record, American Specialties was self-released on cassette in 2010. It was followed last year by their first full length album, Light Up Gold.

With 15 songs in just a little over 35 minutes, Parquet Courts create tightly wound jangly post punk song bursts that cover such topics as stonerism, joblessness, munchies, stonerism, girlfriends and even more munchies. Like Guided By Voices and They Might Be Giants before them, many of the songs on Light Up Gold clock in at just over a minute, yet they are very well written and fully formed.

On today’s Song Of The Day, vocalist Andrew Savage, who sounds like a cross between Stephen Malkmus (of Pavement) and Jonathan Richman (of The Modern Lovers), details the prospects for job security in this day and age, and quickly comes to the conclusion that the military is his only choice. While the song is born of the punk esthetic, it manages to make its point on a bed of rolling drums in just 67 seconds without histrionics.

But Parquet Courts’ sound is not all short bursts of adrenalin either. The band  proudly wears their sixties influences on their sleeve, particularly on the album’s centerpiece, “Stoned And Starving,” which clocks in at a little over five minutes and features a rambling guitar solo courtesy of Andrew Savage. Elsewhere, the pseudo-psychedelia of “Caster Of Worthless Spells” sounds like a long lost Mothers Of Invention outtake.

Light Up Gold is a riveting record full of hazy disenfranchised lyrics brought into sharp focus by the band’s succinct indie guitar laden tunes. It is also a record well worth checking out.