You are here: Home / Music / Classic Rock / Song Of the Day – “Even In The Quietest Moments” by Supertramp 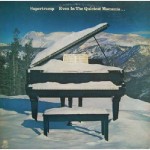 At the time of the release of Supertramp’s sixth album Breakfast In America, the band was on the precipice of a major commercial breakthrough that would see them top the U.S. charts for the first time. Yet, all of the elements were already in place and can be found on their previous platter Even In The Quietest Moments.

Before Breakfast, Supertramp was predominantly known for their progressive rock leanings, however what set them apart from all of the other prog groups was their attention to melody and tunefulness. Their music was less about technical prowess, dynamic key signatures and fussy arrangements and more about straight-ahead melody.

This came down to the group’s two distinctly different songwriters, Roger Hodgson and Rick Davies. As a rule, Hodgson’s songs were the most pop oriented, while Davies’ contributions took them into darker more ruminative territory. Most of their songs were credited to both of them, but after 1972 the two seldom collaborated together and wrote individually. Sonically, Hodgson was the vocalist with the high-pitched, child-like voice that contrasted sharply with Rick Davies deeper timber and more straight-ahead delivery.

The band at this point featured Roger Hodgson on vocals, keyboards and guitars, Rick Davies on vocals and keyboards, Dougie Thomson on bass, John Helliwell on wind instruments and vocals and Bob Siebenberg (credited as Bob C. Benberg) on drums and percussion.

The acoustic guitar intro of Hodgson’ album opening “Give A Little Bit” announced a new, more commercially succinct sound that paved the way for Breakfast In America. However, the song was not a new song at all. Hodgson originally wrote it as a teenager in 1970, but believing it was too simple and not up to snuff, he held it back from the band for six years. Ultimately, the song reached the #15 spot on the U.S. pop charts.

The song has been used numerous times in conjunction with fundraising for disaster relief. About this aspect of the track, Hodgson has said, “I’m very, very happy to lend it to any worthwhile fundraising or disaster relief. For Hurricane Katrina, it was used a lot and for the tsunami also and for many others, so it’s very wonderful to have a song that can be used in that way. Very gratifying.”

Today’s Song Of The Day, the album’s title track, is perhaps the most intimate recording in the group’s entire canon. The gorgeous acoustic “Even In The Quietest Moments” was composed during a soundcheck, and is the only song on the album that was collaboratively written by both Hodgson and Davies. Hodgson: “It’s kind of a dual love song – it could be to a girl or it could be to God.”

Another Hodgson gem is “Babaji” that delves into the spiritual journey that ultimately led to his departure from the group several years later. A babaji is a Hindu holy man. “Lover Boy” is perhaps the most melodic song on the album and was written by Davies. The song was inspired by advertisements in men’s magazines offering tips on how to pick up girls.

The album concludes with the nearly eleven minute opus “Fool’s Overture.” The song began as a collage of musical ideas and the lyrics deal with the fall of human mankind. The track contains a sample of Winston Churchill’s “We shall fight them on the beaches” speech. The album’s cover shows an image of a piano covered in snow (which was a real photo and not superimposed) with the sheet music to “Fool’s Overture” in full view, however the actual music on the sheet is for “The Star Spangled Banner.”

The album rose to the #16 spot on the album charts and, at the time of its release, was the group’s most successful album…until Breakfast In America came along and launched the band into the mainstream. Hodgson would stay around for one more album before leaving the band for good. The band limped along for a few more years releasing several albums and touring, omitting Hodgson’s songs from their repertoire, before breaking up in 1988.

Today, Supertramp fans get a choice of a Davies-led Supertramp that tours around the world, or they can go see Hodgson plays separate solo shows. When asked whether Roger Hodgson might appear on some of Supertramp’s 2011 dates Davies replied, “I know there are some fans out there who would like that to happen. There was a time when I had hoped for that too. But the recent past makes that impossible. In order to play a great show for our fans, you need harmony, both musically and personally. Unfortunately that doesn’t exist between us anymore and I would rather not destroy memories of more harmonious times between all of us.”

Unfortunately, the studio version of today’s Song Of The Day is not available on YouTube. In its place, please enjoy this live solo version by Roger Hodgson.