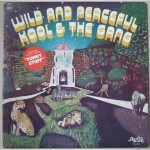 When Kool & The Gang topped the charts with “Celebrate” in 1980, they were at the peak of their success, but as far as I was concerned, they were long past their prime. To many, that prime happened seven years earlier with the 1973 album, Wild And Peaceful and its clutch of super funky singles.

Kool & The Gang hailed from Jersey City, New Jersey and formed in 1964 as The Jazziacs. They then changed their name to Kool & The Flames, and later settled on Kool & The Gang so as not to be confused with James Brown and His Famous Flames. Their most famous lineup included Robert “Kool” Bell on bass, brother Ronald Bell on tenor saxophone, James “J.T.” Taylor on lead vocals, George Brown on drums, Robert “Spike” Mickens on trumpet, Dennis “Dee Tee” Thomas on alto saxophone, Clay Smith on guitar, and Rick West on keyboards. While James J.T. Taylor would later go on to become a solo star in his own rite, he was not a member of the band when they recorded today’s Song Of The Day.

The group signed to Gene Redd’s De-Lite Records in 1969, but it was their 1973 album Wild And Peaceful that put the group on the musical map. The album included three bona-fide hit singles including today’s Song Of The Day, “Hollywood Swinging” (“Hey Hey Hey, What cha got to say!”) which topped the R&B charts in 1974 (#6 Pop) and the two horn-driven funk workouts that opened the album, “Funky Stuff” and “More Funky Stuff” (“Can’t get enough…of that funky stuff…”). The three singles were all recorded in one night and were based on aspects of Manu Dibango’s hit recording of “Soul Makossa.”

With its “Get Down, Get Down” call to action, and a rumbling bass line designed to move the tush, “Jungle Boogie” crowded dance floors all over the world as it climbed to the #4 position on the pop charts in 1973. Samples of the track have turned up in The Beastie Boys’ “Hey Ladies,” Madonna’s “Erotica,” Janet Jackson’s “You Want This” and M/A/R/R/S’ “Pump Up The Volume.” The song was also featured in the Quentin Tarentino film Pulp Fiction, as well as in many video games. The clip of the song shown here is from the group’s 1974 appearance on The Midnight Special.

The hit albums Light Of Worlds and Spirit Of the Boogie followed in 1974 and 1975 respectively before the group decided to change their focus from funk to pop with the addition of new lead singer James J.T. Taylor in 1979. That’s when the group lost me, however they did pick up millions of new fans with their new pop direction.

The group’s signature single was “Celebrate” which became the go-to goodtime party anthem of the 1980s. The chart-topping single was produced by Eumir Deodato who had chart success of his own in the early 70s with his hit version of the Strauss-composed classical piece “Also Sprach Zarathustra.”