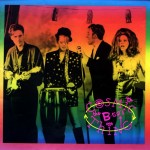 “Follow Your Bliss” is perhaps the most unique recording in the entire B-52’s catalog; it is also the perfect closer to their greatest album.

By the time of The B-52’s comeback album Cosmic Thing the group was ten years into their career. After becoming media darlings for the new wave, they soon found themselves in a dramatic free fall that left them practically unable to give their records away at retail.

Formed in Athens, Georgia in 1976, The B-52’s consisted of Fred Schneider on vocals, percussion and keyboards, Kate Pierson on organ, bass and vocals, Cindy Wilson on vocals, tambourine and guitar, Cindy’s brother Ricky Wilson on guitar and Keith Strickland on drums. With an image that looked backwards to the 1950s complete with beehive hairdos and thrift-store attire, and a sound that took elements of ‘60s surf and girl group rock filtered through a contemporary sheen highlighted by Ricky Wilson’s angular playing and unusual guitar tunings, the group hit upon a sound and look that made them the face of New Wave music.

Their self-titled debut album from 1979 included the zany signature hit “Rock Lobster,” plus fan favorites “Planet Claire” and “52 Girls” giving them traction in the world of underground rock. An appearance on Saturday Night Live in 1979 further cemented their popularity with the burgeoning college rock crowd. The 1980 follow-up Wild Planet also sold very well and included another big single “Private Idaho” plus “Quiche Lorraine,” “Strobe Light” and “Party Out Of Bounds” that kept the band’s buzz going. A remix record called Party Mix was released next as a stop-gap while the band continued to tour, and an appearance in Paul Simon’s film One Trick Pony continued to keep the band’s momentum going.

Their 1982 summit with Talking Heads leader David Byrne on production was a real coup, bringing the band added credibility. However, things did not go well in the studio and the sessions were aborted with the resultant record Mesopotamia coming out as an EP instead of a full length LP. While the record didn’t produce any big hits, it was critically acclaimed and the title track was a popular album cut on radio.

Their next album called Whammy came two years later and saw a decline in the band’s fortunes. Although it included several strong tracks like “Song For A Future Generation,” “Whammy Kiss” and the single “Legal Tender,” the album only charted in the top 30 and The B-52’s found themselves in litigation with Yoko Ono over the track “Don’t Worry,” forcing them to pull it off of the album.

Bouncing Off The Satellites was guitarist Ricky Wilson’s last album. Unbeknownst to the rest of the band, he was suffering from complications of HIV/Aids during sessions for the record and he succumbed to his illness in October 1985 at the age of 32. The band did not tour in support of the record, resulting in poor sales and no hit singles. It was a shame too, because the record included one of their greatest singles “Summer Of Love” and the song “Girl from Ipanema Goes to Greenland.” With the band’s future in question in the aftermath of Wilson’s death, they took almost two years off to regroup.

When they reconvened in 1988 to work on a new set of songs, Keith Strickland had moved over to guitar and Don Was and Nile Rodgers were brought in to handle the production duties. The resultant album Cosmic Thing is the band’s ultimate party disc featuring an updated sound on a very strong collection of songs including the first single “Channel Z” which went to number one on the Modern Rock charts, reestablishing them with the college rock crowd.

But it was the group’s next single “Love Shack” that found them propelled into stratosphere of popularity. You couldn’t turn a radio on in 1989 for any amount of time without hearing the jubilant party strains of “Love Shack” filling the air, and the single still remains a popular favorite today. The song was inspired by a real cabin with a tin roof in Athens, GA where the band composed their first big single “Rock Lobster.”  Kate Pierson lived there for a time as well, and yes, it did have a “tin roof rusting.”

The album also includes a clutch of contagious dance rock confections like “Channel Z,” “Junebug” (later used in a Target commercial), “Dry County” and “Deadbeat Club.” The latter track also featured a guest shot by Michael Stipe of R.E.M in its video clip.

The follow up single to “Love Shack’s” was called “Roam,” which also climbed to the number three slot on the charts on the wings of a great melody and Kate Pierson’s distinctive vocals. Around this time, Pierson also appeared on Iggy Pop’s single “Candy” landing him into the top forty for the first time in years, and also sang on R.E.M.’s “Shiny Happy People.”

Today’s Song Of The Day, “Follow Your Bliss” is the sole instrumental on the record and is a perfect melding of the symphonic sound The Beach Boys perfected on Pet Sounds with the twang of surf guitar that lies at the heart of The B-52’s sound, bringing the ultimate party that is Cosmic Thing to a chilled out close. And after all was said and done, Cosmic Thing climbed into the U.S. top five and was certified multi-platinum.

By 1990 Cindy Wilson left the group and they continued on as a trio for their next album Good Stuff. Although the album made it into the U.S. top twenty, it was an anemic collection of tired second rate material that failed to gain the group any new momentum.

Wilson rejoined the band in 1998 to record two new songs for their Time Capsule compilation and stayed on for the tour that supported its release. While the group became a popular touring attraction, they wouldn’t release any more new music until 2008’s Funplex.

Funplex debuted at No. 11 on the Billboard album charts in the U.S., immediately making it the second-highest charting album in the group’s career. Although they heavily supported its release with television appearances and extensive touring, the record barely made any money for the group putting the likelihood of any future releases of new B-52’s material in jeopardy.

Meanwhile, the band hits the road every year, sometimes in package tours with like-minded groups of their era like The Go-Gos, Blondie and Cyndi Lauper, making them a top attraction on stage. The touring band includes musicians Sterling Campbell on drums, Paul Gordon on keyboards and guitar and Tracy Wormworth on bass.  At the end of 2012, Keith Strickland gave notice that he would not continue touring with the band leaving them as a trio of Cindy Wilson, Kate Pierson and Fred Schneider. They will once again tour with Blondie this summer in Europe and America.