You are here: Home / Music / Alternative / Song Of The Day – “No Matter What Shape (Your Stomach’s In)” by The T-Bones 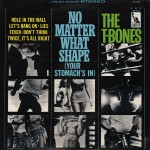 And now, a message from our sponsor…

It used to be that if an artist sold a song to Madison Avenue for use in a TV commercial, it was considered taboo and completely selling out to the man. Nowadays, recording artists line up to have Madison Ave. consider their music because it provides exposure they can’t get anywhere else. Heck, even The Beatles have licensed their music to be used in TV commercials, and today when you turn on the TV, it is not out of the ordinary at all to hear music from your favorite artist turn up in a TV commercial or a TV show, or even more to the point, discover new music you’ve never heard before via the medium.

Back in the 1960s, artists like Herb Alpert benefitted by having their songs used in commercials, but they were squarely in the minority. Does anybody remember “The Teaberry Shuffle?”

Another 1960s Madison Ave. phenomenon was songs that started life in TV commercials and then crossed over into the pop charts. Today’s Song Of The Day is one such song.

“No Matter What Shape (Your Stomach’s In)” began as an Alka-Seltzer commercial showing various stomachs of different shapes and sizes, ensuring viewers that Alka Seltzer could bring relief to any stomach. The Sascha Burland composed jingle melody proved so infectious that Joe Saraceno, The Ventures’ producer and arranger Perry Botkin Jr. turned it into a chart hit by assembling some studio musicians and recording them under the name of a group who had already recorded records for the Liberty record label called “The T-Bones.”

The T-Bones were actually three different groups. The first version of the group was assembled by Liberty Records producer Dave Pell and consisted of Leon Russell on piano, Steve Douglas and Plas Johnson on saxes, Tommy Tedesco and Glen Campbell on guitars, Ray Pohlman on bass, and Hal Blaine on the drums. This version of the group released two hot rod albums in 1964 called Boss Drag and Boss Drag At The Beach, plus the dance album Do The Jerk.

The second version of The T-Bones was the group who recorded “No Matter What Shape (Your Stomach’s In)” consisting of Tommy Tedesco on guitar, Hal Blaine on drums, Carol Kaye on electric bass and Lyle Ritz on upright bass. The song was produced by Joe Saraceno and recorded at United Artists studios in Hollywood on December 9, 1965. The thought was that rather than establishing a new group, they would take the already somewhat established entity called The T-Bones and use the name again for this new studio aggregation.

Once the song began getting airplay, a third version of the group was assembled in order to promote the record and handle public appearances. That group consisted of brothers Judd Hamilton and Dan Hamilton, Joe Frank Carollo, Richard Pello and Tommy Reynolds. This version of the group only actually played on their very last record called Everyone’s Gone To The Moon (And Other Trips).

The single reached #3 on the charts in 1966 and the album peaked at #75. A follow-up single was released called “Sippin’ N Chippin’ (which was a Nabisco jingle) and that peaked at #62 on the charts. The album included instrumental covers of The Four Seasons’ “Let’s Hang On,” Bob Dylan’s “Don’t Think Twice (It’s Alright),” The Knickerbockers’ “Lies,” Booker T & The MG’s “Hole In The Wall,” Little Willie John’s “Fever,” plus thematic songs like “Pizza Parlor,” “My Headache’s Gone” and another TV commercial jingle, “Chiquita Banana.”

“No Matter What Shape (Your Stomach’s In)” paved the way for “Music To Watch Girls By,” a Pepsi jingle turned into a hit by The Bob Crewe Generation and “I’d Like To Teach The World To Sing,” a Coke commercial turned hit single by The Hillside Singers and The Seekers.