You are here: Home / Music / Bossa Nova / Song Of The Day – “Bloop Bleep” by Gary McFarland 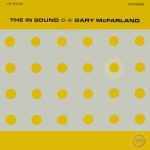 Gary McFarland towed the line between samba infused light jazz and orchestral mood music. He was a vibist from California who was known as much for his vibe playing as he was for his arranging and orchestrations for others.

After serving in the army where he took up trombone, trumpet and keyboards, McFarland settled on the vibes and began fronting an orchestra that backed the likes of Anita O’Day, Bill Evans and Stan Getz. He also recorded notable sessions with Bob Brookmeyer and Gary Burton.

McFarland began to make a name for himself as an artist after recording a 1963 album with Bill Evans called The Gary McFarland Orchestra/Special Guest Soloist: Bill Evans. After writing arrangements for Stan Getz’s 1964 album Big Band Bossa Nova, McFarland dove head first into the Bossa Nova craze that was sweeping the jazz world. He released several Jazz samba albums for Verve Records that were notable for his soft, wordless vocalese singing, atmospheric whistling and intimate Bossa Nova vibe on a mix of originals and covers of some of the current rock and pop hits of the day. In fact, McFarland was one of the first jazz artists of the 1960s to cover Beatles songs.

Today’s Song Of The Day comes from his 1965 Bossa Nova infused masterpiece, The In Sounds featuring the lineup of Bob Brookmeyer on trombone, Kenny Burrell and Gabor Szabo on guitar, Bob Bushnell and Richard Davis on bass, Candino on conga, Sol Gubin and Grady Tate on guitar, Willie Rodriguez and Joe Venuto on percussion, Spencer Sinatra on flute and Sadao Watanabe on flute and tenor sax. McFarland not only plays vibes and sings on the album, but he also wrote the arrangements and conducted. The album was produced by Creed Taylor and was recorded at Van Gelder Studios in Engelwood Cliffs, New Jersey over two days in August of 1965.

McFarland coos vocals about a dripping faucet on today’s Song Of The Day and manages to make it sound intimate, alluring and oh, so sensual. The album is an automatic chill pill that has the power to deposit the listener onto the beaches of Rio de Janeiro at sunset. Following this record, McFarland began to focus more on arranging and recorded several orchestral records that were both intimate and sedate to a fault.

In 1968, McFarland teamed with guitarist Gabor Szabo and vibist Cal Tjader to form the Skye Record label. The label released albums by each of the label principals, as well as titles by Lena Horne, Chuck Rainey, Grady Tate and Airto Moreira. He also released his critically lauded jazz symphony, America the Beautiful around this time.  The label lasted for two years and closed up shop after filing for bankruptcy.

McFarland’s career was cut short on November 2, 1971 after he and his friend David Burnett both ingested drinks that were laced with a fatal dose of methadone in a New York City bar. McFarland was 38 years old.