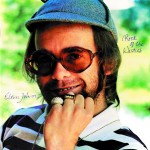 By the release of “Rock Of The Westies” in 1976, the bloom was beginning to fall off of the Elton John flower. While “Westies” was indeed a very good album that debuted at the pole position of the charts, its release signaled the beginning of a long decline in the quality of the music and the relevance of the star. Up to this point, Elton was a white-hot commodity that seemingly could do no wrong. The costumes were at their most outlandish and everything he recorded literally turned to gold and platinum. “Westies” includes a clutch of great Elton songs, including its sole hit, the number one single “Island Girl,” “Dan Dare,” “Hard Luck Story” and this track that features LaBelle on background vocals. Elton’s follow-up album, “Blue Moves,” was a double-length downer that didn’t live up to Elton’s larger-than-life persona, and although it did include the huge hit single “Sorry Seems To Be The Hardest Word,” the double album failed to reach the top of the charts and only spawned the one hit single. Fear not for Elton, he weathered the dry patch that lasted almost ten years, and to be fair, did include a few hits, cleaned up his hard-partying act and recovered nicely by writing songs for Disney films, most notably “The Lion King.”