You are here: Home / Music / Classical / Song Of The Day – “Moon/Light” by Herbie Hancock and Foday Musa Suso 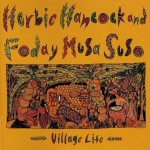 In West African culture, a griot is a musician and storyteller who holds all of the keys to the history of his people. It is the griot’s place in society to share that history through music, entertainment and poetry. The kora is a 21-string instrument that is the chief instrument accompanying a griot. Foday Musa Suso was born in Gambia and is a direct descendent of the inventor who invented the musical instrument over four hundred years ago.

Now anyone who’s ever heard the music of the kora, no doubt, has fallen under its spell. It is a string instrument that has the player handling rhythm, harmony and melody at the same time, similar to the sitar, but the sound of the kora is more mystical in its feel and majestic in its sound.

Back in 1983, I went to see Herbie Hancock perform at the Pier (which was a small outdoor venue) in New York City. Hancock was riding high, particularly in the lower east side dance circles, with his electronic hit “Rockit,” which was one of the first fusions of jazz and hip hop music. Its one-of-a-kind MTV video, directed by Godley and Crème (of 10cc fame), helped to fuel its success, winning a Grammy Award in the process. It was a great show, complete with the “Rockit” mechanical robot legs straight from the video right there on stage, along with such luminaries as Bill Laswell on bass and Grand Mixer D.S.T. on the turntables.

The hit renewed my interest in Hancock, who I had already admired greatly for his work with Miles Davis and his essential solo work, particularly the albums “Speak Like A Child” and “Head Hunters.” My interest led me to discover today’s Song Of The Day from the five-star, 1985 album, “Village Life,” by Herbie Hancock and Foday Musa Suso.

“Village Life” is a high water mark for all involved. The album was recorded in Japan over three days in 1984 with Bill Laswell accompanying Hancock on production duties. At the time of its release, it kind of stuck out like a sore thumb compared to Hancock’s recent hip-hop infused output. Indeed, this is a somewhat more meditative affair, and a straight-up duet album with Hancock playing a Yamaha DX-1 synthesizer (detuned to match the tuning of the kora) and drum machine, and Suso on the kora, talking drum and vocals.

Musically, the album is completely captivating, but sold poorly because Hancock’s recent converts were expecting more music along the lines of “Rockit.” That doesn’t subtract from the fact that this record is truly one of those mesmerizing records that certainly opened my ears up to world music back in 1984, and is still worthy of a far bigger audience today.