You are here: Home / Music / Classic Rock / Song Of The Day – “Please Call Me, Baby” by Tom Waits 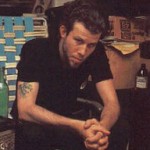 He released one of last year’s best albums, “Bad As Me,” but longtime fans of Tom Waits still mourn the days when he crooned instead of bark and played lots of piano on his records. Don’t get me wrong, I love what he’s been doing since “Small Change” when his voice got super gruff and “Swordfishtrombones” when he began working with his wife Kathleen Brennan and augmented his instrumentation with anything that could be found around the junkyard. Albums like “Rain Dogs,” “Frank’s Wild Years” and “Real Gone” are indeed among his best records and it was nice to hear him playing more piano on his last record too. But the sound of his early records were built around his piano playing and were lushly produced by Bones Howe who also produced classic pop records for The 5th Dimension, The Mamas and The Papas, Elvis Presley, The Monkees and The Turtles. This song comes from his second album, 1974’s “The Heart Of Saturday Night.”