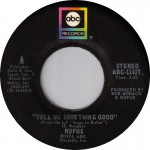 In taking stock of the records that inhabit my jukebox for The Jukebox Series, I’ve come to learn something about myself that I’d like to share. I find it somewhat amusing that there are no records newer than the 1970s included, and with the exception of a few 1950s nuggets, nothing earlier than the 1960s. This leads me to believe that I either find myself in a state of musical developmental retardation, or that every record I’ve chosen for the jukebox is geared to make me feel nostalgic for the years when I was in middle and high school.

This really shouldn’t be such a surprise because when you think about it, the music that we consider OUR music typically harks back to those golden teenage days when we were in public school. It doesn’t matter that those years for some (me included) were the most dreadful years of my life. We still look back on them with rose colored glasses verifying the idea that nostalgia truly is the past with the pain removed, and the musical comfort food that inhabits my jukebox really points this out.

Today’s Song Of The Day was Chaka Khan’s breakout hit as a member of Rufus. Rufus evolved out of the ashes of Chicago group, The American Breed who scored a hit with “Bend Me Shape Me” in the late 1960s. After the American Breed disbanded several members formed a band called Smoke who added vocalist Paulette Williams to the lineup. That group later became Ask Rufus named after a column in the magazine Popular Mechanics. After several more lineup shifts, Ron Stockert was added to the group as vocalist and artistic director and Williams left, recommending her friend Chaka Khan as her replacement.

During the early days of Rufus (shortened from Ask Rufus), Khan was considered one of two co-lead vocalists sharing vocals duties with Ron Stockert. However, when the songs featuring Khan’s lead vocals began to get attention, she became the focal point of the group leading to Stockert’s departure during the recording of their 1974 album Rags To Rufus.

At this point, the group consisted of Chaka Khan on lead and background vocals, Dennis Belfield on bass and background vocals, André Fischer on drums and percussion, Kevin Murphy on organ and clavinette, Al Ciner on guitar, Ron Stockert on vocals and keyboards, Tony Maiden (uncredited) on guitar and talk box and Nate Morgan (uncredited) on keyboards.

The Rags To Rufus album was the group’s last album credited to Rufus, after this they would be forever known as Rufus featuring Chaka Khan. The album also included the huge hit “You Got The Love” (#10 pop/#1 R&B) written by Ray Parker Jr. and Khan, and on the strength of its two singles, the album sold well over one million copies earning a platinum certification.

Today’s Song Of The Day was written by Stevie Wonder and climbed to the #3 position on the pop and R&B charts in 1974. Wonder is said to have recorded a version of the song, but it remains unreleased. “Tell Me Something Good” was one of several songs that Wonder wrote and gave away to female vocalists around this time. Two others notable examples are Aretha Franklin’s “Until You Come Back To Me (That’s What I’m Gonna Do)” (#1 R&B/#3 Pop) and the title track to Minnie Riperton’s chart-topping album Perfect Angel.

Wonder liked the way Chaka Khan sang his song “Maybe Your Baby” on Rufus’ self-titled debut album and decided to give the group another one of his songs to record. As Khan tells it, “Tell Me Something Good” was not the first song that Wonder brought to the band. Wonder came by the studio and played a song called “Come And Get This Stuff,” but Kahn told Wonder that she didn’t like the song. After learning Khan’s astrological sign, Wonder then gave Rufus “Tell Me Something Good” to record and also helped in the studio with the arrangement,  going as far as to coach Khan in the way he wanted her to sing it. The single would go on to with the 1975 Grammy Award for Best R&B Performance by a Duo or Group with Vocals. (Note: Wonder’s “Come And Get This Stuff” would later turn up on his ex-wife’s album Stevie Wonder Presents Syreeta.)

“Tell Me Something Good” also features an early example of the use of a talk box during the chorus. The talk box was played through a guitar by Tony Maiden and was also made famous by Joe Walsh on his track “Rocky Mountain Way” and by Peter Frampton on “Show Me The Way” and “Do You Feel Like I Do.” The sultry B-side of “Tell Me Something Good” was “Smokin’ Room,” an album cut also culled from Rags To Rufus.