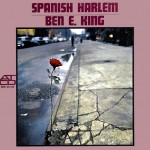 Today’s Song Of The Day exposes me for who I really am…a sucker for a great pop song. Give me a lush hummable melody and a simple lyric that I can relate to, add to it some strings for sweetening, and I’m a happy boy. So it should come as no surprise that the music that emanated from The Brill Building in New York City (1619 Broadway on 49th Street) from the late 1950s through the mid-sixties is right up my alley.

I think that growing up in proximity to New York City gave me an added appreciation of the music that came from that building’s hallowed halls, as the rhythm of the streets, the vibe and sounds of the city are inherent in every recording, and “Spanish Harlem” is certainly no different.

Today’s jukebox classic is from a double A-sided single I purchased cheaply on line when I first got the juke. It is one of the original records that I put in there, and it is also one that I can’t see myself ever taking out. I just never tire of Ben E. King’s classic “Spanish Harlem.”

The Spanish Harlem section of New York City was a crime-ridden Latino neighborhood, and the 1960 hit was written by Jerry Lieber and Phil Spector and released on the burgeoning Atco record label. Lieber’s partner Mike Stoller, did the arrangement on the track and came up with the song’s signature intro fill that runs throughout the song; however he does not receive a composer credit. Mike Stoller: “I presumed my contribution was seminal to the composition, but I also knew that Phil didn’t want to share credit with anyone but Jerry, so I kept quiet.”

The song was King’s first hit after leaving The Drifters, climbing to the #15 position on the R&B charts and #10 Pop, and it also served as the title track of his debut solo album. Singing background vocals was a then-unknown Dionne Warwick (as a member of The Gospelaires). The day the track was cut was indeed very productive, as King also recorded his follow-up single “Stand By Me” during the same session.

Aretha Franklin covered the song in 1971 and scored an even bigger hit with it climbing to the #1 position on the R&B charts and #2 on the Pop charts. Dr. John is also heard playing piano on her version. The song was also covered by the likes of Larua Nyro (on her essential 1971 album Gonna Take A Miracle), Jay And The Americans, The Mamas & The Papas, Leon Russell, Chet Atkins, Neil Diamond, Tom Jones, Herb Alpert & The Tijuana Brass and even Led Zeppelin, who used to incorporate the song’s melody into live performances of “Dazed And Confused.”

The flip of this double A-sided 45 is King’s 1962 version of “Don’t Play That Song (You Lied)” which was written by Atlantic Records head honcho Ahmet Ertegun and Betty Nelson (although my 45RPM copy is credited only to “Nugetre” which is Ertegun backwards). King’s version of the song climbed to the #2 position on the R&B charts and up to #11 on the Pop side. The song was also covered again by Aretha Franklin on her 1970 album Spirit In The Dark. Her version peaked at #1 on the R&B charts and went to #11 Pop.