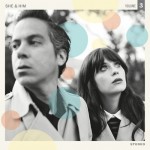 Music critics crack me up. They’re always looking for something to dis about a record in order to validate their jobs as critics. And, I suppose at times I am no different than the rest. Nothing is ever just great, some fault must be found in order to have something to say. I guess without criticism, you’re just not a critic.

The rap critics usually give Zooey Deschanel and M. Ward every time they release a new She & Him record is that the music is too lightweight and twee with no heft whatsoever.  And to this, I find myself asking what exactly do they expect from this duo, death metal?

Breezy, sun-kissed ‘60s sounding pop is not only She & Him’s stock in trade; it is also what they do best. So if you’re not predisposed to liking this kind of music, than you really have no place reviewing one of their records. But critics do what they do, and slagging off She & Him seems to be one of their favorite pastimes.

For me, She & Him’s retro-pop songs, shimmering string arrangements and heavenly background vocals are right up my alley, and I’ve been a fan of Zooey Deschanel’s dusty voice since I first heard her in the movie Elf singing “Baby It’s Cold Outside” in the shower. (It doesn’t hurt that she’s also not too bad on the eyes, either!) The fact that she also stars in the successful TV sit-com New Girl, which I positively love, is just icing on the cake. Furthermore, M. Ward also has a successful career releasing exceptional critically-acclaimed albums, both solo and with his quasi-supergroup side project, Monsters Of Folk. He is also a terrific producer and a sturdy performer in concert as well.

She & Him were introduced to each other by Martin Hynes who was directing Deschanel in the starring role for the film The Go-Getter. Hynes wanted Deschanel to sing a song over the closing credits of the film, so he introduced her to M. Ward and while recording a cover of Richard & Linda Thompson’s “When I Get To The Border” for the film, the two bonded over their shared a love of sunny, ‘60s pop. Deschanel had been writing for several years as a hobby, and shared her backlog of finished songs with Ward, resulting in the birth of She & Him.

It’s interesting to point out at this juncture that most people are painfully unaware that Deschanel is not only a terrific actress and singer, but she is also a top shelf songwriter, for which she gets little credit. Over the years She & Him have released three albums consisting mainly of Deschanel’s original songs. (They’ve also released a Christmas album.) And while Deschanel is clearly the star of this show, Ward’s understated influence on the proceedings as an arranger and producer is crucial, for without him the album wouldn’t have the transistorized retro pop AM radio sound that makes it work so well.

On the surface, the record is all sunshine, lollipops and ukuleles, especially on the tracks “Somebody Sweet To Talk To” and “Together.” But scratch a little deeper than the surface and you quickly find out that there’s more to this record than meets the ear. Deschanel gets her melancholy on with today’s Song Of The Day, the gorgeous pop ballad “Turn To White,” where hints of cloudy days appear as she sings “But I’m stronger than the picture that you took before you left / In the light, it faded to white…” perhaps alluding to her divorce from husband Ben Gibbard of the band Death Cab For Cutie.

Elsewhere, Deschanel sings “Your love is a blessed curse actually / Bad gets worse supernaturally” in the song “Something’s Haunted You,” and on “I’ve Got Your Number Son” she sings “What’s a man without all the attention? / Well he’s just a man… / Who am I without all your affection? / I’m a nobody,” further cementing the notion that the fallout from her failed marriage has effected the sunny disposition of these proceedings.

Rounding out the record are three well-chosen covers including Deschanel’s smoky pop reading of “Hold Me, Thrill Me, Kiss Me” which was a top ten hit in the 1950s by Karen Chandler, and then again in the 1960s by Mel Carter.  Their Brill Building pop cover of Ellie Greenwich’s classic 1965 hit “Baby,” is also a perfect fit for this album, and Deschanel’s superb reading of Blondie’s “Sunday Girl” proves that Debbie Harry has nothing on her.

While many consider the group inconsequential and lightweight, they do have the clout to attract the likes of Tom Hagerman of Devotchka, Pierre de Reeder of Rilo Kiley, Joey Spampinato of NRBQ and Mike Watt of The Minutemen as guest musicians on this album.

There are times that It’s hard to tell where Deschanel’s New Girl character, Jess Day begins and Zooey Deschanel ends. However, four albums in Deschanel  proves not to be the clueless cringe-inducing doe-eyed waif like she portrays on TV, but a supremely talented artist who is firmly in charge and knows exactly what she wants.

Volume 3 offers nothing that Volume Two and Volume One didn’t, but as the title suggests, this is just the latest edition of first-rate non-stop pleasing pop sounds, performed to perfection by the New Girl and her super talented counterpart.