You are here: Home / Music / Alternative / Song Of The Day – “Waiting Is Forbidden” by Rudresh Mahanthappa 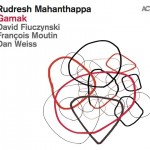 Welcome to the sonic space where Ornette Coleman’s Prime Time meets King Crimson. Sound intriguing? If it doesn’t, read no further because today’s Song Of The Day is not for the faint of heart or those of closed mind.

Despite his exotic name, Rudresh Mahanthappa was born in Italy of Indian descent, but raised in Boulder Colorado from a very young age. He studied music at Berklee in California and earned his Master Of Fine Arts degree at DePaul University in Chicago. While at Berklee, he was introduced to Indian saxophonist Kadri Gopalnath, and the two traveled to India to play concerts between 2005 and 2008 while working on a grant. He is a Guggenheim fellow and was nominated for the 2012 Downbeat International Critics Poll as Alto Saxophonist of the Year.

Mahanthappa relocated to New York City in 2010 where he leads several different outfits including The Rudresh Mahanthappa Quartet (with Vijay Iyer or Craig Taborn on piano, François Moutin on bass, and Dan Weiss on drums), Raw Materials (with Vijay Iyer), Indo-Pak Coalition (with Rez Abbasi on sitar-guitar and Dan Weiss on tabla), MSG (with Ronan Guilfoyle on bass and Chander Sardjoe on drums) and the electro-acoustic quartet Samdhi featuring guitarist David Gilmore.

Mahanthappa has released 13 albums and has appeared as a sideman on 19 other projects. Today’s Song Of The Day comes from his latest album entitled Gamak featuring David “Fuze” Fiuczynski on electric guitar, Francois Moutin  on acoustic bass and Dan Weiss on drums.

Mahanthappa rips shards of sound from his horn at jaw-dropping break neck speed on “Waiting Is Forbidden,” the album’s opening track, while Fiuczynski, who is one of the most original guitarists I’ve heard in years, lays out some harmolodic sound (in which harmony, movement of sound, and melody all share the same value), taking what Ornette Coleman’s Prime Time was doing and moving it forward. Then right in the middle of it all, the whole band effortlessly goes into full-on King Crimson crunch mode. It’s a track that is both breathtaking and totally original in its scope.

Elsewhere, there are echoes of Cecil Taylor and Albert Ayler sifted through a prog-rock filter. “Lots Of Interest,” finds Fiuczynski shadowing Mahanthappa on the guitar before both go their separate ways and coming back together time and time again. On the track “Abhogi” Fiuczynski plays a slippery slide part on his guitar that is reminiscent of some of the playing of King Sunny Ade, and the track called “F” allows Moutin to set the tone on the bass while the rest of the group answers his call.

Rudresh Mahanthappa is one of the most innovative composers and performers in jazz today and Gamak is as spellbinding an experience that you’re likely to get on any current jazz album.