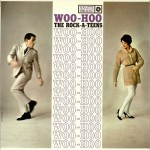 Every so often, when I’m jonesin’ for some ‘50s rockabilly or some good old rock ‘n’ roll, I need not look any further than Rhino’s exceptional Loud Fast & Out Of Control: The Wild Sounds Of The ‘50s box set. The set was compiled by Gary Stewart, James Austin and Bill Inglot and released in 1999. Its 104 tracks are a comprehensive and enjoyable survey of the late ‘50s rockabilly scene including prime cuts by everyone including Gene Vincent, Eddie Cochran, Johnny Burnette, Elvis, Jerry Lee Lewis, Little Richard, Fats Domino, Chuck Berry, and dozens of others. While the hits are well represented, it’s the many rarer picks and one hit wonders that steal the show. I listened to the 4-CD Rhino box in its entirety the other day, and today’s Song Of The Day is one of the gems that caught my ear.

Boo Walke & The Rockets were a 1950s Rockabilly group from Virginia who changed their name to The Rock-A-Teens and found fleeting fame with their sole hit record. Their lineup included Vic Mizelle on vocals and guitar, Bobby “Boo” Walke on guitar, Bill Cook on guitar, Eddie Robinson on sax, Paul Dixon on bass and Bill Smith on drums.

They auditioned for a Virginia record shop owner named George Donald McGraw with their song called “Rock-A-Teen Boogie” which when released on McGraw’s Doran record label was renamed “Woo Hoo.” The song, plus its B-Side, “Untrue” were recorded in the back room of McGraw’s record store in one day.

When the record was first released in 1959, the Rock-A-Teens were listed on the record as the song’s writers.  Arthur ‘Guitar Boogie’ Smith recognized elements of his own songwriting and sued the group for plagiarism, and McGraw settled out of court by purchasing the song’s copyright for a few hundred dollars in order to avoid a court case. Meanwhile, McGraw was wheeling and dealing on the group’s behalf and cut a deal with infamous music industry legend and alleged mobster Morris Levy, who released the record on his Roulette label with the writing credits on both sides of the record given to McGraw. Such was the stuff of 1950s rock ‘n’ roll.

The Roulette single spent 12-weeks on the charts and peaked at #16.  Based on the success of the single, Roulette pulled the group into the studio to record their sole album.  The Woo Hoo album (Roulette SR-25109) was said to have been a raw garage rock record that edged on punk rock, probably because Mizelle and Walke had to teach Cook and Dixon how to play their instruments in the studio.

The album was a dismal flop on the charts, but is now an in-demand collectable today. By 1960, it was all over and the group hung up their rock ‘n’ roll shoes never to be heard from again.

The song was covered by The 5.6.7.8’s and used to great effect in the Quentin Tarentino film Kill Bill.

Thanks to the Black Cat Rockabilly Europe website for information for this article.