You are here: Home / Music / Classic Rock / Song of the Day by Eric Berman – “Dear Prudence” by The Beatles 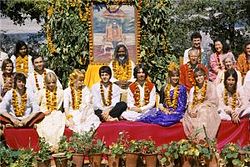 Prudence was, of course, actress Mia Farrow’s sister. They were in attendance in India studying Transcendental Meditation with Maharishi Mahesh Yogi along with The Beatles, Donovan and Mike Love of the Beach Boys. Prudence was very serious about TM and spent most of her time in her room meditating. Beatle John was concerned for her wellbeing and wrote this song inviting her to come out to play. Prudence went on to become a teacher and still practices TM to this day. The song appeared on “The Beatles” better known as “The White Album” from 1968 and features Paul McCartney on drums because a frustrated Ringo had walked out of the sessions — and the band — for a few days.