You are here: Home / Archives for Leonard Cohen

1965, The Who play the Cheltenham Festival in Gloucestersire, England, along with The Yardbirds, Shades of Blue and The Hellions. It is one of the oldest music festivals in Britain, held annually in Cheltenham in June/July since 1945. 1966, Jack Bruce, Ginger Baker and Eric Clapton formed the group Cream. The band is widely regarded as being the world's first successful … END_OF_DOCUMENT_TOKEN_TO_BE_REPLACED 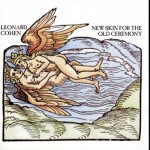 Song Of The Day by Eric Berman – “Who By Fire” by Leonard Cohen It’s that time of year when Jews atone for sins and pray for forgiveness… in exchange for another year on the planet. It’s an unspoken deal Jews strike each year with God and and I am just superstitious enough to continue to go along with it. Today’s Song of the Day by Eric Berman is a track from Leonard Cohen’s … END_OF_DOCUMENT_TOKEN_TO_BE_REPLACED

Today’s Song Of The Day is a track from Leonard Cohen’s fourth studio album New Skin For The Old Ceremony. The song derives from the Unetanneh Tokef prayer that is said on Rosh Hashanah and Yom Kippur, the Jewish High Holy Days. The song is sung as a duet on the album with fellow Jewish folk singer, Janis Ian. Leonard Cohen: “That song derives very directly from a Hebrew … END_OF_DOCUMENT_TOKEN_TO_BE_REPLACED

Before he became a right-wing zealot, recording TV-sold religious records, Charlie Daniels was a superb session musician, songwriter and producer. Daniels wrote songs for Elvis Presley (“It Hurts Me”) in the early 1960s, and played on numerous late ‘60s sessions for producer Bob Johnston including on records by Johnny Cash, Leonard Cohen, Marshall Tucker Band and three Bob … END_OF_DOCUMENT_TOKEN_TO_BE_REPLACED

Sometimes when bad things happen to people, other people benefit. Case in point is the story of Leonard Cohen. The Canadian musician/poet spent a good portion of his 77 years amassing a fortune off of such classic songs as "Hallelujah," "Suzanne," "Bird On A Wire," "So Long Marianne," "Sisters Of Mercy," "Famous Blue Raincoat," and countless others. Several years ago he found … END_OF_DOCUMENT_TOKEN_TO_BE_REPLACED