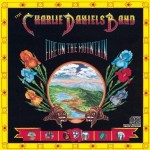 Before he became a right-wing zealot, recording TV-sold religious records, Charlie Daniels was a superb session musician, songwriter and producer. Daniels wrote songs for Elvis Presley (“It Hurts Me”) in the early 1960s, and played on numerous late ‘60s sessions for producer Bob Johnston including on records by Johnny Cash, Leonard Cohen, Marshall Tucker Band and three Bob Dylan albums (“New Morning,” “Nashville Skyline” and “Self Portrait”). With his own Charlie Daniels Band, he scored numerous hits including “Uneasy Rider” (‘Ol Green Teeth, anyone?), “The South’s Gonna Do It Again,” the jingoistic “In America” and the number one smash “The Devil Went Down To Georgia” for which he won a 1979 Grammy Award. This song is from “Fire On The Mountain,” his most consistent album recorded in 1974. First pressings of the album came with a free 7” EP featuring live recordings from the first Volunteer Jam concert. Daniels’ Volunteer Jam concerts began in 1974 highlighting him and many others in his Southern Rock cohort and still continue today.