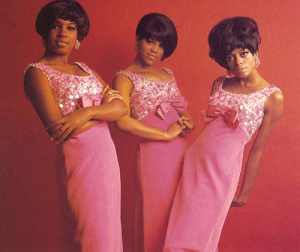 1964, The Supremes became the first all girl group to have a UK chart topping single when “Baby Love” went to the top of the charts.

1965, David Bowie and the Lower 3rd appeared at The Marquee Club, London.

1965, The Kinks, The Who, Georgie Fame & The Blue Flames, The Hollies, Wilson Pickett and The Golden Apples Of The Sun all appeared at the Glad Rag Ball, Wembley Empire Pool, London. Wembley Pool seats 10,000 and is the biggest venue The Who had yet played. However, they are forced to use the communal amplifiers and Roger Daltrey storms off in mid act demanding The Who’s amps be installed. The rest of the band perform instrumentals while Roger gets pelted with vegetables. Finally The Who’s amps are brought on and Roger returns to the mike.

1966, The Supremes started a two week run at number one on the US singles chart with “You Keep Me Hanging On,” the group’s seventh US chart topper. It made it to number eight in the UK. It was a top ten hit in the US for Vanilla Fudge in 1967.

1967, The Bee Gees, The Flowerpot Men and The Bonzo Dog Doo Dah Band all appeared at the Saville Theatre, London, England.

1967, Pink Floyd appears at the Coventry Theater in Coventry, England.

1972, The Grateful Dead play the Hofheinz Pavilion at the University of Houston.

1973,  Led Zeppelin begin sessions for their sixth album by recording a demo called “Driving to Kashmir.” The song title would later be shortened to just plain “Kashmir.” The sessions break up when John Paul Jones threatens to leave the band to become a choirmaster.

1976, UK music weekly Sounds made The Sex Pistols debut 45 “Anarchy In The UK,” its single of the week.

1976, George Harrison and Paul Simon are taped for a sketch on Saturday Night Live.

1982, Led Zeppelin release their ninth and last studio album,  Coda.  It is a collection of unused tracks from various sessions during the band’s twelve-year career. It was released two years after the group had officially disbanded following the death of drummer John Bonham. The collection goes to number six in the US and four on the UK charts.

1983, Tom Evans from Badfinger committed suicide by hanging himself in his back garden from a willow tree. Family members said the singer, songwriter was never able to get over his former bandmate Pete Ham’s suicide. Evans co-wrote “Without You,” a hit for both Harry Nilsson and Mariah Carey.

1983, Tina Turner made her first chart appearance in over ten years with her version of the Al Green hit “Let’s Stay Together.”

1988, Bon Jovi started a two week run at number one on the US singles chart with “Bad Medicine,” the lead single from the band’s album New Jersey, It became the group’s third US chart topper, and a number 17 hit in the UK.

2000, The Beatles started an eleven-week run at number one on the UK album chart with The Beatles 1. The album was produced by George Martin, and features virtually every number-one single released from 1962 to 1970. Issued on the 30th anniversary of the band’s break-up, it was their first compilation available on one CD. The world’s best-selling album of the 21st century, 1 has sold over 31 million copies, and topped album charts virtually worldwide.

2003, English bassist player Greg Ridley died from pneumonia. He was a member of the VIP’s with Keith Emerson, Spooky Tooth, and Humble Pie who had the 1969 UK number four single “Natural Born Bugie.” He formed Strange Brew with Clem Clempson and Cozy Powell.

2004, Record producer Terry Melcher, who was behind hits by the Byrds, Ry Cooder and the Beach Boys, died aged 62 after a long battle with skin cancer. He was the son of actress Doris Day, and co-wrote “Kokomo” for the Beach Boys. Melcher also produced “Mr Tambourine Man” for the Byrds, as well as hits for The Mamas and the Papas.

2012, Two farmers were found not guilty of health and safety offences after a giant hay bale crushed former ELO cellist Mike Edwards to death. He was killed instantly when the 600 kg (1320 pound) bale rolled down a field and landed on his van near Totnes in Devon in September 2010. In March 2011 in Plymouth an inquest jury returned a verdict of accidental death on Mr Edwards.