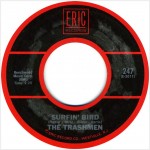 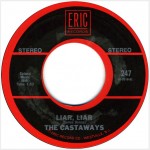 Today’s jukebox classic is a near-perfect pairing of two garage rock classics by two different artists on one solid 45 RPM record. One side gives us the stompin’ “Surfin’ Bird,” a song that set ‘60s frat parties into motion by The Trashmen. It is paired with another garage classic on the flip, The Castaways’ one-hit wonder “Liar Liar,” in all its primal glory.

The Trashmen’s “Surfin’ Bird” was itself an amalgam of two other hits originally by The Rivingtons, one being “Papa-Oom-Mow-Mow,” and the other, “The Bird Is The Word.” The Trashmen took the chorus to both Rivington songs and strung them together to make this nonsensical garage rock classic. When the record came out, the songwriting was credited to the group’s singer and drummer Steve Wahrer whose idea it was to string the two songs together. After legal representatives from The Rivingtons’ camp contacted The Trashmen, later copies of the single gave The Rivingtons sole writing credit of the song.

The Trashmen formed in Minneapolis in 1962 and consisted of Tony Andreason on lead guitar and vocals, Dal Winslow on guitar and vocals, Steve Wahrer on drums and vocals and Bob Reed on bass guitar. Along with “Surfin’ Bird,” they placed five other singles in the charts including “Bird Dance Beat” which climbed to #30 in 1964.

The song has been covered by the likes of The Ramones, Silverchair, The Cramps and Pee Wee Herman who sang it in the movie Back To The Beach. It was also awarded screen time in the movies E.T., Full Metal Jacket and in John Waters’ classic cult film Pink Flamingoes.

Most recently, the song was used in a 2009 episode of Family Guy which brought the track back to the #50 position on UK singles charts, and #10 on the iTunes chart. It was also the subject of a Facebook campaign to send the song up the UK charts in 2010, in order to keep the winner of X-Factor off the top of the charts during the Christmas season. The campaign resulted in the song’s highest chart position of #3. The group broke up in 1967, but reformed in the 1980s and have toured on and off in some form ever since.

On the flip of today’s double A-sided single is another garage classic, “Liar Liar” by the one-hit-wonder garage rock group The Castaways. The Castaways were also from Minnesota and consisted of James Donna on keyboards, Robert Folschow and Dick Roby on guitar, Roy Hensley on bass and Dennis Craswell on drums.

The group formed to play frat parties where today’s song became popular enough to allow the group to record and release the track on the Soma record label. It is Folschow’s falsetto that is heard on the single which climbed up to the #12 position of the singles charts in 1965. The group performed the song in the 1967 beach movie It’s A Bikini World.

The song was also used in the films Good Morning Vietnam and Lock, Stock and Two Smoking Barrels, and was covered by Debbie Harry of Blondie in 1988 for the film Married To The Mob. Harry’s version climbed to #14 on the Modern Rock charts. The group still exists today with James Donna the only original member.

Oh, and as for the reissue label of today’s jukebox classic, you really can’t go wrong with a label named Eric…