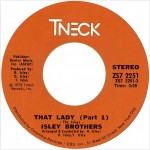 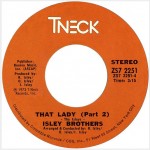 From gossamer to “grit-tay”…the other day I featured a satiny-smooth jukebox classic by Smokey Robinson and the Miracles…today we’re going gritty with this funky 1973 track by The Isley Brothers.

They were one of the longest running R&B groups of all time forming in Cincinnati, Ohio in 1959 and recording and touring together in some form through 2010.

The Isley’s were responsible for such indelible hits as “Shout,” “Twist And Shout,” “This Old Heart Of Mine (Is Weak For You),” “Black Berries,” “It’s Your Thing,” “Pop That Thang,” “Love The One You’re With,” “Summer Breeze,” “Fight The Power,” “Harvest For The World,” plus many others. Today’s Song Of The Day comes from their 1973 album called 3+3.

The album became their first platinum album, selling over one million copies. Along with “That Lady,” two other tracks from the album made waves on the R&B charts including their cover of Seals & Crofts’ “Summer Breeze” (#10 R&B) and “What It Comes Down To” (#5 R&B). The group also covered Jonathan Edwards’ hit “Sunshine” and James Taylor’s “Don’t Let Me Be Lonely Tonight” for the album.

Today’s Song Of the Day was originally recorded back in 1964 by The Isley’s under the title “Who’s That Lady.” That version was cut at a slower tempo and was driven by a spare staccato drum pattern, a roller-rink organ part and a full-blown horn section. The group decided to record the song again after Santana covered it on their Spirits Dancing In The Flesh album.

At first, Ronald Isley was against cutting the track again, however the rest of the group convinced him that the arrangement would be much different and it would highlight the guitar work of brother Ernie. Ernie’s guitar playing was informed by the Isley Brothers’ association with Jimi Hendrix who played with the group in 1964. Hendrix can be heard on the group’s “Testify” and “Move On Over And Let Me Dance” singles. The song became their first top-ten hit since 1969’s “It’s Your Thing,” climbing to #2 on both the Pop and R&B charts. Brother Ernie’s guitar solo was later sampled by The Beastie Boys on the track “B-Boy Bouillabaisse” from Paul’s Boutique.

Another distinction about today’s jukebox classic is that it is one in a long line of two-part singles. When 45 RPM singles ruled, it was customary to break longer tracks into two parts for the single release. The Isley Brothers were no stranger to the two-part single, and as far back as 1959, “Shout” was released as a two-parter.  Many of James Brown’s singles were released in the two-part format including “Say It Loud (I’m Black And I’m Proud,)” “Get Up I Feel Like Being A Sex Machine,” and “Papa’s Got A Brand New Bag.” Other notable two-part singles include Joey Dee’s “The Peppermint Twist,” Fleetwood Mac’s “Oh Well,” Creedence Clearwater Revival’s “Suzie Q,” Don McLean’s “American Pie,” Eddie Kendricks’ “Keep On Truckin’,” George McCrae’s “Rock Your Baby,” Rick James’ “Super Freak,” Kurtis Blow’s “The Breaks” and Bob Dylan’s “Hurricane.” What other two-part singles can you think of?