You are here: Home / Music / British Invasion / Song of the Day – Dusty Springfield: “The Look Of Love” 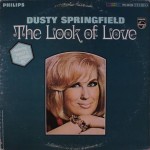 She was also credited with introducing the Motown Sound to English music fans by helming a special edition of the British music TV show Ready Steady Go!, that featured the first UK TV appearances by Martha Reeves and the Vandellas, The Temptations, The Supremes, the Miracles and Stevie Wonder. She also covered her share of Motown hits for consumption by the UK market and some of her versions were more popular than the originals.

Mary Isobel Catherine Bernadette O’Brien (aka Dusty Springfield) got her start as a member of the “sister” act The Lana Sisters performing on TV and as part of shows on military bases around the UK. From there, she joined the family folk group called The Springfields with her brothers Tom and Tim who were best known by their recording of “Silver Threads And Golden Needles.”

Today’s jukebox classic is one of Dusty Springfield’s signature hits, written by Burt Bacharach and Hal David for the James Bond film parody Casino Royale. The song was originally intended to be an instrumental until David wrote lyrics to the song. It was nominated for Best Song in the 1968 Grammy Awards. Springfield recorded the song twice. Her first recording was released on Colgems Records on the soundtrack to the film Casino Royale.

Burt Bacharach: “When I’m scoring a picture, whether it’s Butch Cassidy or Casino Royale or What’s New Pussycat?, all those melodies that turned into what became hit songs came from what I saw on the screen when I was scoring and what I heard. The first thing is you service the motion picture. If you’re lucky enough and you have a theme that turns into a hit whether it was Dusty (Springfield) singing ‘The Look Of Love’ in Casino Royale, what was most important there was the sexuality of Ursula Andress wearing very little clothes and making very sexy theme with the saxophone playing the melody of ‘The Look Of Love.’ Then we put Dusty on. First and foremost is it’s written for the picture, you don’t force it in.” (Record Collector via Songfacts)

Springfield then rerecorded the song for the Philips label in 1967, where it was relegated to the B-side of her “Give Me Time” single. It also appeared on The Look Of Love album, which was her last U.S. album for Philips Records in 1967 before signing with Atlantic and releasing the landmark Dusty In Memphis record. (Tracks for her last Philips album entitled Dusty Definitely in England were not released in America until the 1990s, and then they were released under the title Dusty In London.)

The song has been covered by a myriad of artists including Sergio Mendes and Brasil ’66 (whose version charted at #4 on the pop charts), Nina Simone, Shirley Bassey, Isaac Hayes, Ahmad Jamal, Claudine Longet, Diana Ross and the Supremes, Dionne Warwick, Andy Williams, The Delfonics, Tony Joe White, The Meters, The Vanilla Fudge, The Zombies, Diana Krall (whose recording made it into the top ten of the Canadian charts), Anita Baker and literally dozens more.

The flip is Springfield’s 1966 single “All I See Is You”, written by Ben Weisman & Carl Westlake, which also reached the US Top 20.