You are here: Home / Music / Oldies / Peabody’s Picks – The Jaggerz: “The Rapper” 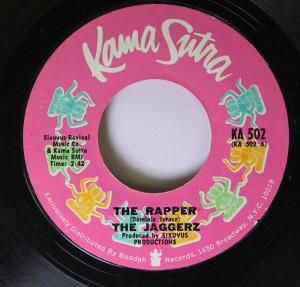 In the mid 60s, Slippery Rock State College student Dominic Ierace (better known by his stage name Donnie Iris) was in a succession of bands, culminating in a Pittsburgh group called the Jaggers, which was signed by the legendary Philadelphia duo Gamble and Huff. Prior to recording their debut album, they notice there was another group called the Jaggers, so they changed the name to “Jaggerz”. Contrary to what I believed at the time, which was that they were merely, a la Maroon 5, trying to cash in on the fame of Mick Jagger, it turns out that “jagger” is Pennsylvania slang for a thorn bush. Their debut album, produced by the aforementioned Gamble and Huff, was mostly successful only in their native state.

They quickly left Gamble and Huff and signed with Neil Bogart’s Kama Sutra records, where they recorded their second album, We Went To Different Schools Together. The initial single from that album, “The Rapper”, released in December of 1969, went all the way to #2 on the U.S. charts, and, trust me, I was there, was ubiquitous on AM radio for quite some time thereafter. For those saying “wait a minute, the Sugarhill Gang’s “Rapper’s Delight” was the first rap song”, ease your worried mind, in the early 1970s “rapping” meant talking, and particularly in the context of this song, smooth talking, as the protagonist is an operator able to talk young ladies into things they might normally not do.

The group had a couple more singles reach the top 100, but quickly faded and are thought of these days as a one-hit wonder. Iris went on to an eerily similar solo career, in that he is known only for the 1981 hit “Ah Leah”. He has continued to perform and record in the Pittsburgh area, and even had his own beer brand for a while, but will forever be known as the “Rapper” and “Ah Leah” guy.