You are here: Home / Peabody's Picks / Song of the Day – Roy Buchanan: “The Messiah Will Come Again” 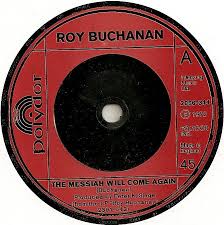 Roy Buchanan is one of rock’s most tragic figures. Insanely talented, held in awe by his world-famous peers, Buchanan was a tortured soul whose pain could be clearly felt through his music. The tragedy of his life was twofold: first, that in spite of his off-the-charts abilities, he was never known to the general public, but rather familiar only to serious rock fans and secondly, that he was found dead, hanging from his own shirt, in a jail cell in Fairfax County, Virginia at the age of 48. One often hears of guitarists who can make the instrument “talk” or “cry” or “sing”, Buchanan could do all that and then some. The only artists who even come close are Jeff Beck (who matches Buchanan for technique but not emotion) and the late Gary Moore, who, not surprisingly, covered the song we’re about to discuss.

Which leads us to “The Messiah Will Come Again”, considered by many to be Buchanan’s masterpiece. After a spoken introduction which alludes to the life and crucifixion of Jesus Christ, he takes the listener on a journey through melancholy, sadness, despair and redemption, utilizing virtuoso technique, dynamics (something rarely heard from rock guitarists, although it should be noted that Buchanan was equally proficient in the country and jazz styles), and some of the sweetest Telecaster tones known to man. Bonus trivia – the signature guitar lick was previewed on the early Buchanan recording “Black Autumn”, which features a young Charlie Daniels on vocals.