You are here: Home / Music / Alternative / Song Of the Day by Eric Berman – “California” by U2 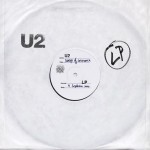 Song Of the Day by Eric Berman – “California” by U2

So U2 literally dropped their new album Songs Of Innocence the other day on an unsuspecting public by giving it away via Apple iTunes. It was announced by Apple CEO Tim Cook at the company’s latest presentation touting their new iWatch and iPhone 6. Apple paid for a five week exclusive window to give the record to more than 500 million subscribers making it the biggest album release of all time.

Coincidentally, it was this past Monday at my weekly Vinyl Night at The Green Room in Libertyville, IL (well-deserved shameless plug) my friend Lance Schart, who is the biggest U2 fan I’ve ever met, and I were discussing the trouble U2 was having in releasing a new record.

After all, the band had been promising new music since the end of last year when they released the “Ordinary Love” single from the film Mandela: Long Walk To Freedom and an additional track called “Invisible” as a giveaway tied to a Super Bowl commercial in February (both unmemorable). After attempting to build hype and failing, the band decided to go back to the drawing board and postpone the release of the record.

I told my friend that what U2 really needed to do at this juncture was to stop trying to be another band by working with a myriad of “hip” producers in order to produce a huge hit, and just go about the business of being U2 by releasing a record that sounds exactly like a U2 album should…. which is exactly what they did.

For long-time fans of the band like me, this was great news and I quickly and eagerly snapped up the files in order to give the record a “virtual spin.”

Personally, I think it’s a good record after a few spins. Not one of their strongest, but certainly not their weakest either. With a few spins, it’s evident to me that songs like “The Miracle (Of Joey Ramone),” “Every Breaking Wave,” “Iris (Hold Me Close)” and today’s Song Of the Day by Eric Berman, “California” would end up being highlights of sing-alongs in stadiums around the world when they take the album on tour.

Now, I’m also one who gets caught up in the hype of a new release that I’m truly excited about, so I posted a photo of the album on the “Now Playing” Facebook page, which is a closed group consisting of music geeks who get a kick of posting pictures of the records that we’re playing and getting comments from fellow collectors. I posted the photo on Wednesday morning and was met by a barrage of negativity.

It seems I broke a cardinal rule by posting something the “hip cognoscenti” don’t consider hip. Below is a list of some of the comments I received:

“Burn it with fire.”

“Fucking scum is what they are.”

My reply to the last comment was “Cash grab? They gave it away for free.”

That assertion led to battle cries of how Apple paid them a boat load of money for the privilege, and that it was hypocritical to act like you’re giving something away for free when you are profiting from it.

My response to that was that it was great co- branding opportunity which was brilliant in every way. After all, it had everybody talking about the record and the band, and they found an inventive way to make money in the climate of today’s music industry which most artists do not.

To which another member replied “There’s nothing “inventive” about corporate log rolling at the Apple/ U2 level. It’s no more inventive than a happy meal.” To me, the happy meal was a great way to market fast food to children.

Another fellow member posted “The argument is less around the music itself (for some) and more around the fact that Apple forced it on one-half billion people with no way to remove it. If you didn’t fancy a band and someone said, “I’m going to permanently put this album by a band you dislike into your music collection and you have no say whatsoever,” you would likely be annoyed or even disgusted, too.” His point is well taken, however you can easily delete the album and be done with it, so no skin off anyone’s back.

I should say that there were also many comments on the thread that supported the band’s move and were complimentary towards the music as well.

For a band like U2 who have stood at the precipice of irrelevance for many years now, they’ve managed to not only release a good record, but to make themselves relevant at least for a day or two.

Now you can be the judge, while YouTube is totally devoid of tracks from the album, you can always go to iTunes to give it a spin.