You are here: Home / Music / British Invasion / Song of the Day by Eric Berman – “Claudine” by The Rolling Stones 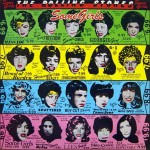 Today’s Song of the Day by Eric Berman is an outtake by The Rolling Stones from the Some Girls album sessions. The subject of the song is Claudine Longet, who was 19 years old when she met and married Andy Williams who was 14 years her senior. She had three children with Williams, and in the mid-sixties pursued an acting and singing career.

She met Olympic skier Vladimir “Spider” Sabich while at a celebrity ski tournament in Bear Valley in 1972. By 1975 she and her children had moved into Sabich’s chalet in the Starwood section of Aspen, Colorado. Things went well between the two for nearly a year until the relationship started to deteriorate and Sabich requested that Longet vacate the premises. On March 21, 1976 Sabich was shot in his bathroom by a .22 caliber pistol.

Longet’s lawyers pleaded the case as an accident and Longet testified that Sabich had been showing her how to use the gun when it went off. Ballistics experts at the trial testified that the safety catch was defective on the gun.

Sabich was killed by a single bullet to the abdomen and bled to death on the way to the hospital. (The only inaccuracy in the song is the reference to three shots.) He was 31 years old.

On January 14, 1977 Longet was convicted of negligent homicide and spent 30 days in the Pitkin County Jail. Claudine was granted family rights during the week which meant that she only served time on the weekends. She went on to marry her defense attorney and continues to live in Aspen.