You are here: Home / Music / Classic Rock / Song Of The Day by Eric Berman – “Our Day Will Come” by Ruby And The Romantics 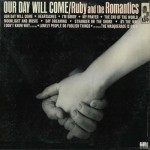 The magical ingredient of today’s Song Of The Day by Eric Berman that sets it apart from all others is the ear-gasmic, swirling roller rink organ.

“Our Day Will Come” was Ruby & The Romantics’ first hit and only million seller from way back in 1963. While many think the group was a one hit wonder, their follow-up single, “My Summer Love,” rose to #16 on the charts.

Ruby And The Romantics were also responsible for the original version of the song “Hey There Lonely Boy” which became a hit for Eddie Holman in 1969 as “Hey There Lonely Girl,” and “Hurting Each Other” which did the trick for The Carpenters in 1972.

The group featured Ruby Nash on lead vocals with Ed Roberts, George Lee, Ronald Mosley and Leroy Fan on support vocals. Frankie Valli and the Four Seasons brought “Our Day Will Come” back to the charts in 1975 with their remake of the song which just missed the top ten at #11.