You are here: Home / Music / Classic Rock / Song of the Day by Eric Berman – “Lordy” by Neil Diamond 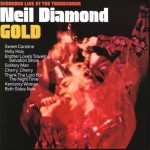 Song of the Day by Eric Berman – “Lordy” by Neil Diamond

If ever an album was ripe for reissue and expansion, it would be Neil Diamond’s 1970 live album called Gold.

While most people reach for their copy of the Hot August Night when they want a live fix of Neil Diamond, his Gold album finds him sweating it out backed by a small group in front of an intimate audience, and is a far more satisfying listen.

The album was recorded live at The Troubadour in Hollywood, California on July 15, 1970. Diamond’s small but powerful backing band included Carol Hunter on guitar, Randy Sterling on bass and Eddie Rubin on drums. While the band was small in numbers, they manage to whip up a frenzy throughout this essential Neil Diamond live document.

The Neil Diamond we hear on this album isn’t the syrupy sweet balladeer of “Heartlight” and “You Don’t Bring Me Flowers.” Instead, we get a rough-cut Diamond with straight-up unpretentious readings of some of his greatest songs, including his current single at the time, “Brother Love’s Traveling Salvation Show” and “Sweet Caroline,” way before it became the property of karaoke stars doing Elvis Presley.

Diamond digs into his Bang catalog for spirited performances of some of his early singles like “Cherry, Cherry,” “Kentucky Woman,” “Solitary Man” and “Holly Holy,” no gratuitous medley’s here, we get the full performances of each song. The set also included a hushed intimate reading of what he said at the time was one of his own favorite songs, “And The Singer Sings His Song,” as well as a reading of his hit cover of Joni Mitchell’s “Both Sides Now.”

But it’s the album’s opener and today’s Song Of The Day by Eric Berman, “Lordy,” finds Diamond rocking out harder than he ever had before (and would ever do again) as he spits out the opening lyrics “Hey, Lady, she got painted eyes, Have a way of talking to you, Cut your heart out for the prize, While the bitch sings hallelujah.” The song gained much notoriety when it was issued as the B-side of the “Cracklin’ Rosie” single.

I’ve often wondered if the tapes from this all too brief album still exist, and if so, why the whole show hasn’t been issued. Diamond was inducted into the Songwriters Hall of Fame in 1984 and into the Rock and Roll Hall of Fame in 2011. Additionally, he was an honoree at the Kennedy Center Honors in 2011. He recently released his 32nd studio album Melody Road and will take to the road once again to promote it. You really can never go wrong seeing Diamond in concert, but he would never reach the heights he did back in 1970 at The Troubadour ever again.

Shine on you crazy Diamond!