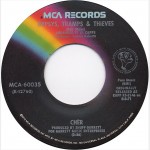 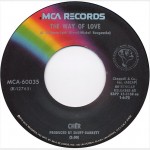 Today’s jukebox classic is as much a testament to performance and great songwriting, as it is to timing and opportunities demonstrating the power of television when it comes to career revival. In 1971, Sonny & Cher were offered their first television variety show, The Sonny & Cher Comedy Hour which debut in August and became a big hit. As a result, many of the songs Cher performed on the show also became her biggest hits. Case in point is today’s Song Of The Day which was performed in September of 1971 on the show, and by November it was sitting atop the charts selling over four million copies in its wake.

When it was released, it had been four years since Cher had had a top ten single with “You Better Sit Down Kids,” and this song not only marked a comeback for Cher, but put her firmly in the spotlight where she has remained ever since. It was also the song that kicked off the era of Cher as a glamour queen wearing dresses designed by Bob Makie rather than the hippie attire she was known for up to this point. As a result, she became an icon to both gay men and middle-aged housewives at the same time.

The song was from her seventh solo album which was simply titled Cher, however the album was retitled Gypsies Tramps & Thieves after the single broke big. It was Cher’s first album for a new record label (Kapp Records) and also her first without Sonny Bono at the production helm.

The song was originally titled “Gypsies, Tramps & White Trash,” but songwriter Bob Stone amended the title upon the urging of the late, great producer Snuff Garrett. The song tells a story about the cyclical nature of life from the vantage point of a sixteen year old girl from a family of gypsys whose mother dances for the men of the town, and then they move on to the next town. The daughter was “born in the wagon of a traveling show” whose mother “used to dance for the money they’d throw.” Years later, the daughter finds herself in the same position dancing for money when she meets a 21 year old guy who travels with the show. Three months later, he finds out that she’s “a girl in trouble” (i.e. pregnant) and then he leaves her in the lurch. A performance of the song was performed on The Sonny & Cher Comedy Hour TV show and was made into a video for the song in 1971.

The song is regularly used to kick off games by the Clyde F.C.  Scottish football team. It was covered by the likes of Cilla Black, Vicki Lawrence, Nirvana and the English punk rock band Anti-Nowhere League, amongst others.

The flip of this double-A-sided reissue single was another top-ten hit from the album called “The Way Of Love,” which peaked on the singles charts at #7 selling over one million copies. The melody of this song shares an uncanny resemblance with Perry Como’s 1970 hit, “It’s Impossible,” so much so that Cher took to performing the two songs in a medley during concerts.

“The Way Of Love” had its genesis in the French song “J’ai le mal de toi,” and was written by Jack Dieval with French lyrics by Michel Rivgauche. The lyrics to the English version were written by Al Stillman and the song was recorded by British singer Kathy Kirby, whose version of the song charted at #88 on the U.S. Billboard charts in 1965. The song’s lyrics were somewhat ambiguous as to whether the relationship was between a man and a woman, a mother and a daughter, or most notoriously by two women, further giving Cher credibility with her gay fans.

The song has been covered by Ronnie James Dio in 1964 with his group Ronnie Dio and the Prophets, and has also seen covers by such middle-of-the-road artists as Vikki Carr and Shirley Bassey.